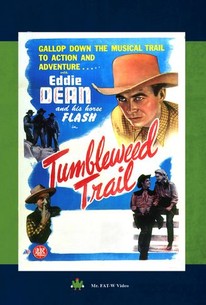 Eddie Dean, PRC's answer to Republic's Roy Rogers, stars in Tumbleweed Trail. The unprepossessing Mr. Dean plays an undercover government agent who comes to the rescue of pretty rancher Robin Ryan (Shirley Patterson). The villains are a band of cattle rustlers, who plan to get at Robin through her younger brother (Johnny McGovern). The plot is resolved when Robin's father, long assumed dead, makes a timely reappearance. Roscoe Ates provides his usual stuttering comic relief, which though a matter of taste was more popular with filmgoers than Eddie Dean's antiseptic heroics.

There are no critic reviews yet for Tumbleweed Trail. Keep checking Rotten Tomatoes for updates!

There are no featured reviews for Tumbleweed Trail at this time.