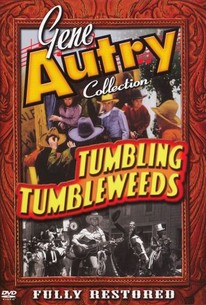 Gene Autry's first starring Western, Tumbling Tumbleweeds sets the pace for the 98 or so Autry oaters to come. As he would for the remainder of his screen career with only one exception, Gene plays Gene Autry, cowboy troubadour, who, upon his return west with musical friends Smiley (Smiley Burnette) and Eightball (Eugene Jackson), not only learns that his father has been murdered but that his childhood friend, Harry Brooks (Cornelius Keefe), is the most likely suspect. Naturally, Harry proves innocent while the real culprit is once again to be found among the town's more notable citizens. Gene, Burnette, and the Sons of the Pioneers (one of whom is the screen debuting Leonard Slye, soon to become Roy Rogers) perform Bob Nolan's title tune, along with "That Silver-Haired Daddy of Mine," by Gene Autry and Jimmy Long; "Ridin' Down the Canyon," by Autry and Smiley Burnette; and "Corn Fed and Rusty," by Burnette.

George Morrell
as Townsman
View All

There are no critic reviews yet for Tumbling Tumbleweeds. Keep checking Rotten Tomatoes for updates!

There are no featured audience reviews yet. Click the link below to see what others say about Tumbling Tumbleweeds!