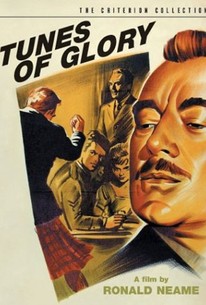 Two excellent actors shine in powerful roles in this drama by Ronald Neame that pits one Scottish army colonel against another. Alec Guinness is Lt. Col. Jock Sinclair, a man who temporarily takes over command of a regiment until his replacement, Col. Basil Barrow (John Mills) arrives. Sinclair comes from the lower echelons of the social order but was at least able to work himself up the echelons in the military hierarchy. He is fairly well-liked though still a little rough around the edges for some. When Barrow takes over, the two men clash almost at once. Barrow is from the upper crust, went to all the "right" schools, and believes in discipline and then a little more discipline, as well as efficient and proper bureaucratic processes. The differences between the two men threaten to rupture the unity of the regiment, especially after Sinclair assaults a soldier he finds in the company of his daughter. Barrow opts to report his behavior, leading to a climactic series of events.

Barry Steele
as One of the other officers

John Barcroft
as One of the other officers

John Bown
as One of the other officers

Critic Reviews for Tunes of Glory

The ending itself is inexcusable.

Guinness and Mills expertly engage with Kennaway's dialogue, which boiled down is two men unable or unwilling to secede control.

A marvelous indictment of institutional machismo and performative masculinity that saw two of England's best actors...play against type and deliver two of their finest performances.

The persistent and lovely sound of bagpipes is almost enough to drown out the sound of men's inner demons clawing at each other's psyches.

Alec Guinness and John Mills prove to be able adversaries in this drama (with sizable dollops of humor) set amidst the officers of a Scottish peacetime battalion.

One of those films... which are of little interest cinematically and out of fashion thematically (no sex, no violence, no low life) and yet manage to be very good entertainment.

It reverts to sentimentality and never manages to get to anything significant.

Every time you think you have a firm understanding of a character's personality, something totally logical occurs that completely changes that assessment.

Audience Reviews for Tunes of Glory

Alec Guinness eats scenery left and right and John Mills seeths on the sideline as two Scottish officers clash in a bloody war of the wills. At stake is an idea: what kind of Army, and by implication, what kind of civilisation do we have? One run by thugs acting like gentlemen, or one where gentlemen act like thugs? (Decide for yourself where you fit in the scheme of things while you watch) By no means just a two man show a regiment of supporting cast hold the flanks of this excellent, if old school, production. A must see if you've an interest in things military washed clean of propagandist rhetoric.