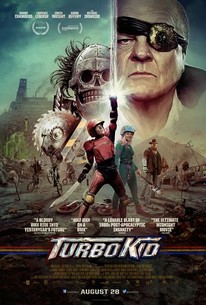 Critics Consensus: A nostalgic ode to kids' movies of yesteryear, Turbo Kid eyes the past through an entertaining -- albeit surprisingly gory -- postmodern lens.

Critics Consensus: A nostalgic ode to kids' movies of yesteryear, Turbo Kid eyes the past through an entertaining -- albeit surprisingly gory -- postmodern lens.

Critic Consensus: A nostalgic ode to kids' movies of yesteryear, Turbo Kid eyes the past through an entertaining -- albeit surprisingly gory -- postmodern lens.

Set in a post apocalyptic year of 1997, this retro-futuristic and nostalgic tribute to 80's action-adventure films follows an orphaned teenager who goes on an adventure to save his female-robot companion from the hands of an evil warlord who controls the only water supply.

Munro Chambers
as The Kid

Anouk Whissell
as The Mother

Evan Manoukian
as Young The Kid

François Simard
as The Father

Sam B. Cloutier
as Guard #5

Jason Eisener
as The Cook

Nathaly Thibault
as Zombie
View All

Now Streaming: The X-Files, Fear the Walking Dead, Fargo, And More
No Escape Is Tense but Problematic

"Turbo Kid" isn't really more mature than its raw generic parts, nor is it clever enough to disarm viewers who want to regress to childhood without feeling guilty for that naive impulse.

Made for ironicists, Turbo Kid, in its endearingly goofy way, says good things about the power reserves of our childhood - an inner superhero we can call upon when needed.

It may be that, while watching the nine-figure reboot of Mad Max, there was a part of you that yearned for the $1.98 version. If so, Turbo Kid is for you.

It's a satire to be sure, but one that embraces its retro origins with an exuberance that is as much fun as it is nostalgic.

Turbo Kid is a completely stupid, over the top, action-comedy with a heart. It's enjoyable if you are one of those who don't need their stories to make a whole lot of sense.

Turbo Kid has the makings of a perfect midnight movie, and will be a nostalgic blast in the face for those of us old enough to remember, or at least those who have developed an affinity for, the cheap Mad Max knock offs of the early 1980s.

It's strange stuff, but there is an endearing quality to it. What the movie lacks in budget, it does makes up for in imagination.

Turbo Kid may leave the smell of plastic in your nostrils, but it's the right kind of plastic, the one you associate with cool toys, cool games and even cooler backyard parties.

Turbo Kid is simultaneously unique and a loving nod to a million familiar pop culture items at once.

The idea of a post-apocalyptic movie about people on bikes that looks and sounds entirely as if it was made in the 80s is awesome. And you can't blame a movie for its low budget. You can blame it for the rather unoriginal story it tells, though. While a lot of people seem ti give it a pass for its great soundtrack, nostalgic trash feeling or the incredible amount of blood and gore effects, the heart of the film feels a bit hollow and, worse, predictable. A guilty pleasure that could and should have dared to be more original.

As a throwback to a retro 1980s style, it is a pity that it looks so cheap and goofy as if made by someone who had just left film school without a dime in his pocket, but despite its flaws, it is an entertaining pastiche full of energy, with Leboeuf and Ironside stealing the show and obviously having a lot of fun.

"In the future," this one begins, "1997"... and its off to the excess races after that sublime proclamation in this postcard homage to those popcorn eaters of glorious youth when everything, even eating popcorn, was played bigger, larger than life, especially if it wasn't that at all. You'll need a raincoat for the buckets of corn syrupy blood splattered everywhere, and there's more android love here as a child of the wasteland fighting the corrupt powers that be, discovers a babe robot (Enough with the advertising, I'm ready for my babe robot right now!) in the process. Echoes of Mad Max Thunderdome just everywhere, too, especially the souped up hotrods everybody be riding. What's not to enjoy?