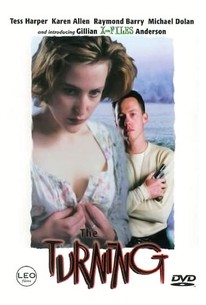 In this drama, Clifford (Michael Dolan) comes back to his hometown of Pocahontas, Virginia after an absense of four years, hoping to reunite with his family and resolve the issues of his unhappy childhood. However, Clifford has arrived just in time to witness the last stages of his parents' divorce; his mother has developed a drinking problem while father has started seeing someone else. However, Clifford isn't going to allow his family to break up, and tries to use force and intimidation to bring his folks back together, as he learned in his years with a neo-Nazi group. The Turning gained a certain infamy years after its release for a brief nude scene in which Clifford makes love to his ex-girlfriend; the partially undraped actress in question was Gillian Anderson, a year before she made her debut on The X Files.

There are no critic reviews yet for Turning. Keep checking Rotten Tomatoes for updates!

There are no featured audience reviews yet. Click the link below to see what others say about Turning!