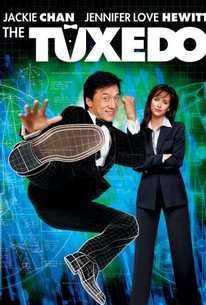 Critics Consensus: Chan is as charming as ever, but his talents are squandered by special effects and bad writing.

Critics Consensus: Chan is as charming as ever, but his talents are squandered by special effects and bad writing.

Critic Consensus: Chan is as charming as ever, but his talents are squandered by special effects and bad writing.

Clothes make the superspy in this high-energy action comedy. Jimmy Tong (Jackie Chan) is a well-meaning but clumsy New York City cab driver who is tapped by Steena (Debi Mazar), associate to multi-millionaire Clark Devlin (Jason Isaacs), for a new job as Devlin's personal limo driver. After a mysterious accident lands Devlin in the hospital, Tong learns that his new boss has a secret -- when he's not wheeling and dealing in high finance, Devlin is also a secret agent for the CSA, a top-level security agency. The secret to Devlin's success as a spy is his trademark tuxedo, a suit which is loaded with special gadgets which turns him into a high-tech fighting machine. After Tong dons the tuxedo and is transformed into a martial arts master, he takes over for Devlin and discovers that the agent's injuries didn't happen by accident. As Tong tries to chase down a handful of international super-villains bent on world conquest, he has to deal with Devlin's new partner, Del Blaine (Jennifer Love Hewitt), a CSA rookie who is just as baffled by her new assignment as Tong. The Tuxedo marked the feature-film debut for director Kevin Donovan, who had previously won international acclaim for his work in television commercials.

James Brown (II)
as Himself

Cecile Cristobal
as Girl In Gallery

Stacey DePass
as Woman In Park

Michael Panucci
as Security Guard No. 2

Perry Perlmutar
as Guy In Toilet

Fred Lee Own
as Poultry Employee

Lisa Levy
as Nurse No. 2

News & Interviews for The Tuxedo

Jackie Chan & Jet Li … in The Same Movie!
It Couldn’t Happen to a Nicer Virgin

View All The Tuxedo News

Critic Reviews for The Tuxedo

But none of those films has been an outright stinker. The Tuxedo is.

With a story that would be right at home in a lame-brained Rob Schneider comedy, the film seems to have been spit out by some sort of devious Hollywood assembly line.

The only possible surprise in The Tuxedo would be an extended demonstration of what was once Chan's trademark, the daffily choreographed kineticism forbidden of late by either his own age or the scruples of story editors.

Chan often looks as tired as the script, and as bored as the viewing audience.

The Tuxedo is sort of like a film that might have been made from a song by Burt Bacharach; its central conceit is odd, implausible, even a bit silly, but one can hardly begrudge it those elements when the thing plays so beautifully.

... The Tuxedo is an amusing diversion.

Both Chan and Hewitt need to have some serious talks with their agents.

Audience Reviews for The Tuxedo

Oh wow, why? Why?! I don't even know if this warrants a review. It's like Spy Kids 2 meets Jackie Chan meets... severe overproduction. Who, in their right mind, thought this would be a good idea when it was pitched? Seriously.

If It weren't for Jackie Chan this would be a horrible film, the script is pretty bad and Jennifer Love Hewwit is just annoying. It does however raise a few laughs which make it almost worthwhile.