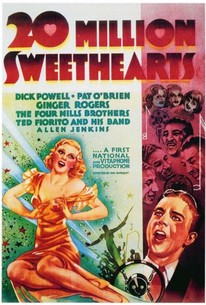 A satire on radio crooners, Twenty Million Sweethearts stars Dick Powell as a singing waiter--fake handlebar mustache and all. Publicity man Pat O'Brien discovers Powell and gets him a radio gig, leading to nationwide adulation for the nonplused tenor. All of this jeopardizes Powell's happy marriage to Ginger Rogers, but he proves faithful to her despite the twenty million sweethearts (i.e. female radio fans) referred to in the title. Twenty Million Sweethearts is fitfully amusing, with some of the best moments concentrated at the beginning wherein the Radio Rogues imitate several popular personalities of the airwaves. This film was remade in 1949 as My Dream Is Yours, with Doris Day (!) in the Dick Powell role but with the same "signature" tune, "I'll String Along with You." ~ Hal Erickson, Rovi

Grant Mitchell
as Chester A. Sharpe

Muzzy Marcellino
as Himself

Sam McDaniel
as Deacon the Waiter

Nora Cecil
as Lady in Bed
View All

If you can stand Mr. Powell-which a great many people are unable to do - you may like the picture, as it is fairly bright and tuneful. Ginger Rogers helps a great deal.

There are no featured reviews for Twenty Million Sweethearts at this time.