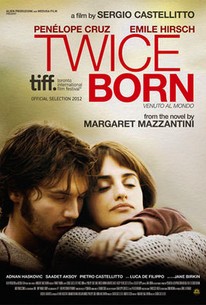 Italian actor/director Sergio Castellitto takes the helm for this romantic war drama concerning a mother who finds her memories of a tragic romance stirred during a trip to Sarajevo with her teenage son. The year was 1984. With the Winter Olympics fast approaching, Gemma (Penélope Cruz) was in Bosnia when she fell in love with dashing American photographer Diego (Emile Hirsch). Their passions burned bright during their brief time together, but shortly after Gemma voiced her desire to become a mother, civil war erupted and plunged the country -- and their romance -- into chaos. Flash forward to present day, when Gemma receives word that an exhibition of Diego's photographs is about to go on display in Sarajevo. Still very much haunted by her complex and difficult past, Gemma boards a plane bound for Sarajevo with her teenage son. The moment she steps off the plane, the memories come rushing back. Later, as Gemma escorts her son around the city sharing stories from her youth, everything she sees seems to stir vivid memories of that ill-fated love affair, and the many ways that the harrowing experience shaped her into the person she is today. ~ Jason Buchanan, Rovi

Critics Consensus: Out of the Furnace is Tough but Uneven

It's debatable whether the best love stories are also the "weirdest," as Emile Hirsch's character declares in "Twice Born." But they do require chemistry, the missing piece in his pairing with Penélope Cruz.

Sergio Castellitto's film projects a tumultuous love story against the backdrop of the Bosnian War for independence, and then seems unaware that the foreground overshadows it in the worst possible way.

"Twice Born" chokes to death on its own melodrama.

Sergio Castellitto's film quickly turns out to be more interested in reveling in the secrets of its storyline than in its sentiments.

A magnificent performance from Penelope Cruz.

Yes, it's all as clunky and tasteless as the description suggests, and the awkward casting doesn't improve this overlong drama.

The recreation of Sarajevo by art designer Francesco Frigeri is equally staggering and beautiful. It's a shame the rest of the team didn't hold up their end of the bargain.

Twice Born wants so desperately to be taken seriously that it creates an unnecessarily complex narrative, void of any chemistry-building moments for its romantic leads.

Shawn Hazelett
Under the Radar

The type of cinematic slog one watches and thinks, 'This would actually be much more interesting as a book.' And that makes sense, really, since that's its original medium.

This European production is thoroughly cheesy and phony, nowhere less so than in its florid, undeliverable dialogue, which sounds like it's been translated, poorly, from various languages into English.

Castellitto clings to the Duraflame fires within for Twice Born, a handsomely crafted but empty feature hoping to recreate Eastern European horror and soap opera intimacy.

When setting a love story in a war-torn environment, it's nice to actually recognize the who, what and why of the conflict.

This Italian war love story/drama is directed by Sergio Castellitto. It is based on a novel by Margaret Mazzantini. I will really suggest this film mostly for Europeans who are familiar with the war on the Balkans, because the major complaint against this movie comes from critics from the United States (I will quote one of them but I read few with similar comments) and go around the line "when setting a love story in a war-torn environment, it's nice to actually recognize the who, what and why of the conflict -- not just treat it like an inconvenience to personal happiness" (Matt Pais, Chicago Red Eye) ! That is why I suggest , if you are not familiar with the war on the Balkans DO NOT WATCH THIS MOVIE, but if you know the background of it - DO NOT MISS IT! The story adapted for the big screen by the author of the novel Margaret Mazzantini and the director Sergio Castellitto was told in flashbacks. Lovely Italian Gemma (Penelope Cruz) meets cheerful American Diego (Emile Hirsch) in Bosnia, and it was love on the first sight, but she thinks this 23-year-old photographer is too young for her... but Diego doesn't take no for an answer! They have to leave and the next flashback is after some time when she's getting divorced... Diego shows up having the perfect timing thanks to Gemma's dad who recognizes her real love for Diego and supports it. I won't go into details of the story, but there are few engaging twists on the way with elements of a thriller. Of course, in a story like this there will be plenty of melodramatic elements but they were well suited. Acting of most of the actors was delightful to watch, and casting was well done. There were some minor mistakes, but we all have them. It seems that somehow the historical facts were sometimes blurred to make the story more dramatic and appealing for the political sentiments... but I expected that, it seems a normal procedure these days in the art. Not a masterpiece, but very enjoyable!