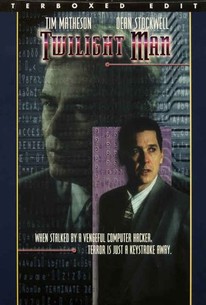 In this high-tech psychological thriller, Tim Matheson plays Jordan Cooper, a college professor and successful author whose life appears to be just the way he'd like. However, one day he goes to the doctor for his annual checkup and discovers all of his computerized medical records have been changed. Before he knows it, Jordan is shipped off to a hospital, scheduled for brain surgery, robbed of his possessions and accused of the murder of his girlfriend. Jordan manages to escape and discovers he's been targeted by Hollis Deitz (Dean Stockwell), an insane and vindictive computer expert who is using his superior hacking skills to ruin Jordan's life.

Barry Bell
as Orderly No. 1

Ken Tireman
as Orderly No. 2

There are no critic reviews yet for Twilight Man. Keep checking Rotten Tomatoes for updates!

There are no featured reviews for Twilight Man at this time.