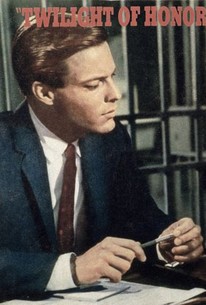 A court appointed attorney defends a young man accused of murdering a respected pillar of the community. David Mitchell (Richard Chamberlain) represents a man who killed one of the town's leading citizen in a heat of passion after finding the man in bed with his promiscuous, teenage tart of a wife. Ben (Nick Adams) found his unfaithful wife with Cole Clinton (Pat Buttram). Cole didn't live long. Joey Heatherton makes her film debut as the young adulteress whose behavior leads to this murder and the gripping courtroom drama that follows. As political pressure mounts to convict the wronged husband, Mitchell confines in a veteran retired attorney (Claude Rains) for valuable consul. Buttram, who often provided comic relief for Gene Autry, performs this time in a dramatic role as the ill-fated philanderer.

Critic Reviews for Twilight of Honor

There are no critic reviews yet for Twilight of Honor. Keep checking Rotten Tomatoes for updates!

There are no featured reviews for Twilight of Honor at this time.