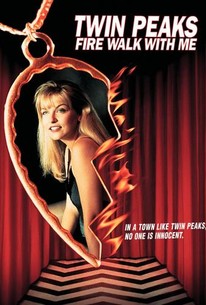 Critics Consensus: For better or worse, Twin Peaks: Fire Walk With Me is every bit as strange and twisted as you'd expect from David Lynch.

Critics Consensus: For better or worse, Twin Peaks: Fire Walk With Me is every bit as strange and twisted as you'd expect from David Lynch.

Critic Consensus: For better or worse, Twin Peaks: Fire Walk With Me is every bit as strange and twisted as you'd expect from David Lynch.

This dark drama is the prequel to the TV series, Twin Peaks, also by director David Lynch. A woman who seems to be innocent and pure by day leads a double life in a rural community where quite a bit of evil lurks just beneath the surface of an otherwise typical American small town. As she was sexually abused throughout her childhood by her possessed father, Laura has some obvious sexual problems and is heavily addicted to cocaine. This film tells of the bizarre and twisted circumstances that led to her murder--which was where the television series began.

Gregory Hormel
as Band at Roadhouse

Eric Da Re
as Leo Johnson

C.H. Evans
as Jack at Hap's

Calvin Lockhart
as The Electrician

Steven Hodges
as Band at Roadhouse

William Ungerman
as Band at Roadhouse

Sandra Kinder
as Irene at Hap's

Michael J. Anderson
as Man from Another Place

News & Interviews for Twin Peaks - Fire Walk with Me

View All Twin Peaks - Fire Walk with Me News

Critic Reviews for Twin Peaks - Fire Walk with Me

David Lynch's prequel film, maligned upon its initial release, can now be seen as a hinge in his filmography - and a hint of what's to come.

In its own singular, deeply strange way, Fire Walk With Me is David Lynch's masterpiece.

There have always been two sides to Lynch: the inscrutable, demonic prankster and the rhapsodic dreamer. In Fire Walk With Me, he's at least trying to recover his poetic sincerity. If only his dreams weren't starting to look like reruns.

At its best, it's a dream within a dream, a nightmare in endlessly reflecting pop mirrors, a screen full of TV-movie sex and horror kitsch blowing up right in our faces.

In Twin Peaks the movie, all the twists get straightened out. The thrill is gone.

For those who are willing to go the distance with Lynch, the return trip to Twin Peaks is well worth the trouble.

Lynch explores how evil influence plays a macabre role in the corruption of goodness, of everything that is sweet and innocent.

The world of Twin Peaks is dense, terrifying, and seductive all at once. Fire Walk with Me has all these trademarks but also presented the reality that David Lynch will never succumb to audience expectation, no matter how rabid they might be.

Engages with the psychological onslaught of the senses that is stirred by trauma in such a furious, intimate way that... the simple act of looking at a framed image of Laura Palmer can send electricity up our spinal cords.

Weirdness abounds, but is always depicted in Lynch's highly stylized, painterly manner. He loves to dwell on images languorously, whether they are horrific or pastoral.

Twin Peaks: The Return elevates FWWM from a questionably necessary prequel movie to an essential piece of a far larger and suddenly more cohesive mythology.

As hard as it may be to watch, Fire Walk With Me is a beautiful, underrated movie that is essential to Twin Peaks.

Audience Reviews for Twin Peaks - Fire Walk with Me

Only two years after winning the Palme d'Or at Cannes for Wild at Heart, David Lynch decided to revisit the town of his much loved TV series Twin Peaks and explore more of that mystery. Only this time at Cannes his film was booed and jeered out the door. Critics hated it. However, if you're a fan of the TV series then this prequel is pretty much essential viewing. Twin Peaks' homecoming queen, Laura Palmer (Sheryl Lee) is a struggling teenager who, by day, is a sought after and cherished member of her small town community. But she leads a double life and, by night, she has an obvious sexual promiscuity and spiralling cocaine habit that explain the circumstances which led to her demise - ending where the television series began. From the opening shot of Fire Walk With Me, Lynch makes a bold statement on what to expect from the film. He depicts a television with no reception before quickly smashing it with an axe. It doesn't take much to understand the symbolism. This film is not in the same style or the quirky, off-beat approach that the TV series had. This is a much violent and sinister revisit to Twin Peaks. Maybe this is the reason why critics gave it a mauling. Although most of the criticisms seem to stem from it being indecipherable. As is often the case with Lynch, though, answers don't come easy and if you haven't seen the television show then this film will, admittedly, make no sense whatsoever. As an avid fan of the show, I personally think this is a superb companion piece and one of Lynch's most criminally underrated films. As much as its tone is darker, it still flirts with the Twin Peaks vibe. The majority of the characters from the series reappear and Lynch also introduces some new one's that fit into the story perfectly; Agent Chet Desmond (Chris Isaak) and his forensic partner Sam Stanley (Kiefer Sutherland) dominate the opening of the film as they investigate the murder of Teresa Banks in the town of Deer Meadow and how her death could have implications on future murders. Their segment of the story contains some classic Lynchian moments - as well as Lynch himself making another welcome appearance as the hard-of-hearing FBI Chief Gordon Cole. From there, we move forward a year and back to Twin Peaks, for the last seven days of Laura Palmer's life. It's here that Sheryl Lee takes centre stage. She had little to do in the series but here Lynch makes her the focus of the film and Lee embraces the chance. Her performance is absolutely superb. She conveys a wide range of emotions and fully captures the despair of Laura. Her struggle is a harrowing and heartbreaking experience and feels, very much, like a tangible tragedy. Along the way, we also get a glimpse of some familiar characters and places; Kyle MacLachlan's Special Agent Dale Cooper makes a brief appearance as does The Man From Another Place and, of course, Killer Bob. We visit The Black Lodge and The Red Room and a genuinely unsettling scene involving the appearance (and disappearance) of David Bowie's Philip Jeffries. Surreal paintings, a dancing lady with a blue rose, backwards taking dwarves, log ladies and oscillating uvulas. This is classic Lynch and his vision of Twin Peaks and the duality of Laura Palmer's life is an altogether nightmarish one. His usual exploration of the depths of the human psyche is once again the major theme as he explores the psychological torture of individuals struggling with good and evil, loneliness and abandonment and the downward spiral of Laura, in particular, weighs devastatingly heavy. It can often be overlooked how much of horror this film is. It's not one in your conventional sense, though. It deals more with the evil within an everyday person and has dark forces at work but it doesn't have the archetypal spectre dressed up for a particular day of the festive year. They don't wield weapons or are seemingly indestructible. The evil at work here is what lingers under the facade of people and that psychological depth is what makes Lynch's film a masterclass in absolute terror. If your a fan of the series then this should appeal very highly. Otherwise, it's probably a Lynch film that you'll want to avoid. Either way, the critics got this wrong. Only those with a lack of familiarity or love for the cult show should find fault here. Mark Walker

Put bluntly, this is not for the uninitiated; but for those who saw the series, this messy prequel is much easier to understand than it seems, inviting us into the dark world of Laura Palmer (Sheryl Lee is fantastic) yet failing to present any reason as to why it had to be made at all.

A pretty high school girl who dabbles with drugs and prostitution is haunted by bizarre dreams and stalked by a mysterious figure known only as "Bob". David Lynch's prequel to his hugely influential TV series Twin Peaks bears all his usual hallmarks. It's the story of the unseen horrors of middle America featuring unsettling and deliberately obtuse imagery which is scored brilliantly with inventive sound design and populated by offbeat characters. The opening in particular as the FBI investigate a similar case a year earlier is classic Lynch and to be honest I wish he'd stayed with them a bit longer. Chris Isaak, Kiefer Sutherland and Harry Dean Stanton all give very memorable performances and Sheryl Lee ably tackles a very complex character. The story set in Twin Peaks features the final days of Laura Palmer and for this reason Fire Walk With Me works neither as a stand alone nor as an introduction to the series; those who have not seen the show will find it incomprehensible while at the same time it gives away far too much of the story. Taken as a companion piece for fans it's a thought provoking and disturbing requiem to a heartfelt story with a very important message.

This prequel to the events of the cult TV show explores the sordid story behind Laura Palmer's last days. There's a good core story here about the doomed homecoming queen, but it's obscured by too much Lynchian fanservice: multiple dream sequences trying too hard to outweird each other, the shoehorning in of popular characters who have nothing to do with Laura's story, and too many digressions (an entire half hour prologue devoted to a previous victim!) meant to tie up loose ends from the cancelled TV series.