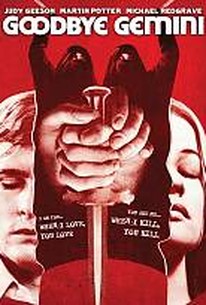 Two 20 year old twins have a bizarre incestuous relationship. Julian (Martin Potter) and his sister Jacki (Judy Geeson) carry on the affair and only reveal their secrets to a stuffed teddy bear named Agamemnon. While their father is absent, they murder the housekeeper and run wild at night. Drugged out parties with transvestites and homosexuals leads to blackmail, debauchery and murder. Julian soon finds himself unable to escape the dark and strange world and finds his fantasies have becomes his worst nightmares. Michael Redgrave appears briefly as a member of Parliament. ~ Dan Pavlides, Rovi

Hilda Barry
as Stallholder
View All

One of the season's drearier departures into decadence.

The setting is swinging-'60s London. The plot is about sexy, incestuous twins with murderous tendencies. Why is this film so dull? Based the novel "Ask Agamemnon" (Agamemnon is a worn-out teddy bear), "Goodbye Gemini" finds golden-blonde, college-age Julian (Martin Potter) and Jacki (Judy Geeson) arriving for a stay at their father's posh townhouse. They are giggling cases of arrested development who, like so many twins, are intimately bonded on their own private wavelength. However, they don't seem so cute once they casually dispose of their stern housekeeper. From here, they appear destined for a shocking spree of sociopathic killings, but instead they...go to parties. Ho hum. They soon meet Clive (Alexis Kanner), a bisexual playboy with ridiculous sideburns who looks like a forgotten Bee Gee. He brings along Denise (Marion Diamond), an insecure girl who hopes to steer Julian away from his sisterly obsession. The group becomes a social foursome, but there's a problem: Clive owes money, and a thug promises to break some bones if the debt isn't paid off. Fast. Clive hatches a blackmail scheme to bleed the wealthy twins, but doesn't realize whom he's up against. Michael Redgrave (what's he doing in this nonsense?) appears as an older TV celebrity who helps Jacki, and Terri Scully plays an amusing queen whose role should have been bigger. Kinky transvestites turn up in odd places (more of a cinematic rarity in 1970), while the mysterious importance of Jacki's beloved Agamemnon was probably better explained in the book. "Goodbye Gemini" is well-directed and has a charismatic cast, but its story is just too thin. This cult film is often compared to "Twisted Nerve," but is far inferior.