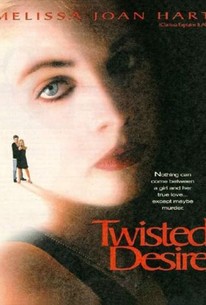 The made-for-TV Twisted Desire could be compared to the 1968 theatrical feature Pretty Poison, the difference being that the earlier film was totally fiction, and the later one based on a true story. In a spectacular example of casting against type, Melissa Joan Hart plays 14-year-old Jennifer Stanton, who despises her dominineering parents (Daniel Baldwin, Isabella Hoffman) so intensely that she fantasizes about removing both of them from the face of the earth. Meanwhile, troubled 17-year-old Nick Ryan (Jeremy Jordan), recently sprung from juvenile detention, is trying to get his act together by working as a gas station attendant. Upon sizing up Nick, Jennifer seduces him, then persuades him to murder her mother and father. The ultimate punishment levied for the crime is bitterly ironic, all the more so because it really happened. Twisted Desire originally aired May 13, 1996, on NBC.

There are no critic reviews yet for Twisted Desire. Keep checking Rotten Tomatoes for updates!

For a b-grade thriller, I assume, straight to video, I really enjoyed this. Melissa Joan Hart is great as the butter-wouldn't-melt psycho chick. I really do have a fondness for such movies. LOL.