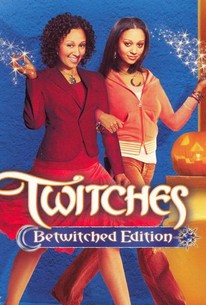 Separated at birth and never told about their identical twin sisters, two confused witches discover the secrets of their magical past upon being reunited on their twenty-first birthdays in a Disney Channel original movie starring Sister, Sister's Tia and Tamara Towry. Adapted from the best-selling series of children's books, Twitches tells the tale of two reunited sisters who set about discovering the true potential of their powers while battling the dreaded force of Darkness in a bid to save the enchanted land of Coventry in which they were born.

There's sort of... cheesy TV level magic but it worked.

Twitches had the perfect mix of what I love: magic, drama, and the return of 90's teen stars, Tia and Tamera Mowry.

...though the Mowry sisters are personable enough, they simply cannot act...

For the Disney Princess crowd that's moving into their teenage years, Twitches should work. It's not bad, per se. But it is just another Disney Channel Original Movie.

Watched with my niece, liked it!