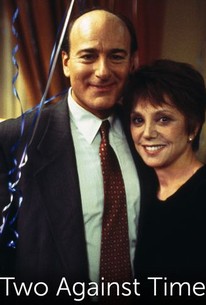 Divesting herself of her useless husband, Julie Portman (Marlo Thomas) is determined to raise her two children by herself, despite the emotional roadblocks set up by her resentful and rebellious teenage daughter Emma (Ellen Muth). Things reach the crisis stage when both mother and daughter are diagnosed with cancer. Ignoring her own weakened condition after extensive chemotherapy treatment, Julie insists upon helping Emma "tough it out" on the road to (hopeful) survival. Occasional moral support is provided by Julie's new sweetheart, philosophical lobster fisherman George (Joe Penny). Based on actual events, the made-for-TV Mother and Daughter originally aired April 21, 2002, on CBS.

Neshera Tingling
as Emma's Friend No. 1

Caley Wilson
as Emma's Friend No. 2

Todd Dulmage
as Doctor No. 1

Vicki Papays
as Doctor No. 2

Grace Armas
as Nurse No. 1

Julie Watson
as Nurse No. 2

Natalie Urquhart
as Prep Student No. 1

Jessica Beitchman
as Prep Student No. 2

Critic Reviews for Two Against Time

Based, of course, on the usual true story, but redeemed by the remarkable mother-daughter performances. In Marlo's suffering, there is no vanity.

There are no featured reviews for Two Against Time at this time.