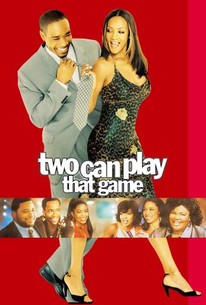 Critics Consensus: As a romantic comedy, Two Can Play That Game is more mean-spirited than romantic. Also, some critics say the movie is misogynistic in its attitudes and has too many blatant product placements.

Critics Consensus: As a romantic comedy, Two Can Play That Game is more mean-spirited than romantic. Also, some critics say the movie is misogynistic in its attitudes and has too many blatant product placements.

Critic Consensus: As a romantic comedy, Two Can Play That Game is more mean-spirited than romantic. Also, some critics say the movie is misogynistic in its attitudes and has too many blatant product placements.

Two Can Play That Game Photos

Love really is a battlefield in this war of the sexes comedy that marks the directorial debut of Def Jam's How to Be a Player (1997) screenwriter Mark Brown. Vivica A. Fox stars as Shante, a knowledgeable veteran of the dating game who thinks she's found the perfect mate in the handsome Keith (Morris Chestnut). When Keith is spotted stepping out with Shante's arch-rival Conny (Gabrielle Union), the spurned lover institutes what she labels the "ten-day plan," an all-out assault on Keith designed to make him come crawling back to her. Shante's scheme includes sexy lingerie, home cooking, aloofness, and other tactics intended to make Keith regret his errant ways, but Keith is receiving contradictory advice from his allegedly worldly wise buddy Tony (Anthony Anderson). Two Can Play That Game is produced by Doug McHenry, director of Jason's Lyric (1994) and Kingdom Come (2001).

Vivica A. Fox
as Shante Smith

Lee Anthony
as Attorney In Elevator

Jeff Markey
as Phil The Attorney

Mo'Nique
as Diedre
View All

Critic Reviews for Two Can Play That Game

Fox and Chestnut, with their fine looks and fine wardrobes, are all dressed up for a party that most guests bailed on in the last days of the old millennium.

Few recent movies have conceived their central female character more contemptuously -- a fanatic for a lifestyle that appears to have come from the bestselling The Rules and someone who is obviously set up for a satiric fall.

A feature-length movie demands a story, and this one barely has the substance of an anecdote.

Doesn't anyone get sick of this same old routine?

The movie doesn't just hate women; it despises them.

A pleasant enough entry in that category, if you like your romantic comedies short on love and long on battle-of-the-sexes gamesmanship.

I shudder at the thought of a 14-year old girl watching this film.

"Two Can Play That Game" has some amusing moments, showcases a terrific cast, but falters in real matters of the heart.

A cute little trifle that delivers on the good time it promises.

Anderson's and Mo'Nique's talents make Two Can Play That Game just amusing and light enough to be worth the trouble despite its often trite familiarity.

Even if [the film] is rather like a sitcom, it is like a really good sitcom. Think "Friends."

Brown has done a fine job with the script and direction in that everyone behaves realistically.

Audience Reviews for Two Can Play That Game

By far my favorite romantic comedy. I don't understand why I'm the only one to like this...?

i love vivica fox but this was terrible

Vivica A Fox rules in this great movie. Her friends in the film are really funny.

Two Can Play That Game Quotes