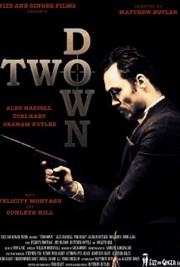 Ian C
November 28, 2018
The polite Britishness of the hitman and his host, at one point offering that it was as much an inconvenience for him as for her, really sets the scene for a clever - if contrived - situation black comedy.

Quite clever, very entertaining and overall despite the deaths with a nice feel good factor!!

With 71 films making their UK and world premiere at the inaugural Manchester Film Festival, it takes a special kind of film to stand out from the crowd. Tipped as one of the highlights is Two Down, a dark comedy about deception, deceit and unlikely friendships in a hitman's final hours. Written by Matthew Butler and Tori Hart of Fizz and Ginger Films with Stephen Fry and Sir Derek Jacobi as Executive Producers, expectations were high when the film made its UK premiere at Manchester Film Festival last night. Thankfully, it delivered.

Two Down tells the story of hired hitman John Thomas (Alex Hassell) who, after his mission his compromised, is forced to take refuge in an old safe house. The film opens with Mr. Thomas following his next target, a young woman, down a deserted alleyway. But all is not as it seems as the woman fights him off long enough for someone in the shadows to shoot him in the back. Injured, confused and desperate to get to safety, Mr. Thomas is forced to hold a young woman Sophie Watson (Tori Hart) and the local take-away delivery boy Luke (Graham Butler) hostage in Sophie's home. But as he waits for his partner to arrive, Mr. Thomas begins to realise he's been deceived and time is quickly running out.

Clever, witty and superbly cast, Two Down is a dark comedy that pays homage to the espionage thrillers of the 1970s. Writers Butler and Hart claim the plot was inspired by films such as The Conversation (1974) starting Gene Hackman which is clearly evident in its overall look and style. Whilst set in modern day London, the film boasts a distinctive 70s feel to it, from its witty dialogue and overall sepia tone, to the well-spoken mannerisms and 70s style moustache of the lead character. The result is an interesting spin on a classic crime thriller that is full of satirical humour.

Alex Hassell (Anonymous, RSC) is excellent as the injured hitman John Thomas, who despite being a murderer, we can't help but love. Clever, well-spoken and quick witted, John Thomas is more than just a hitman and as the film develops, we begin to know more about his complex character. Following an explosion in Iraq, Thomas is forced him into a mundane desk job as an Army clerk. Just like Luke, we're fascinated by the story of how he got into the underground world of the contract killer and we (almost) begin to understand his reasoning behind his life choice.

Tori Hart plays a strong role as Sophie Watson, the intriguing young woman caught up in the crossfire who boasts a few secrets of her own. Graham Butler (Penny Dreadful) is equally good as local take-away delivery boy Luke with his slick comedy timing providing comic relief during the more tense drama moments.

Two Down is the second feature film from Fizz and Ginger Films following the star studied The Curse of the Buxom Strumpet. Since being named Screen International (UK) 'Stars of Tomorrow' in 2013, the creative duo of Matthew Butler and Tori Hart has grown from strength to strength, working wonders with a small budget and tight timeframe (just 12 days of filming) to produce an impressive piece of cinema with Two Down.

Dark, clever and deliciously entertaining, Two Down is one of the best films I've seen this year and is more than worthy of its selection in the inaugural Manchester Film Festival.