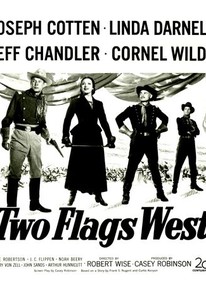 This film is set in the waning days of the Civil War. Colonel Clay Tucker is one of several Confederate prisoners who agree to fight alongside Union soldiers against the Indians in New Mexico. However, Tucker's Union commander despises all "Johnny Rebs," holding them responsible for his brother's death.

Two Flags West is just a fair western, despite its big cast and handsome settings. All of the elements for greatness are there, but the whole thing stumbles into a muddy plot.

... an adult and thoughtful production that explores the conflicts of men who are both enemies and allies in the waning days of the Civil War.

The Western has a thoughtful historical premise and makes the most of it by the solid direction of Wise.

Average picture with standard action. Linda Darnell is stuck in a part the actress stated that she didn't like, she was right it is a nothing that wastes her presence. For western fans it will do all others watch something else.