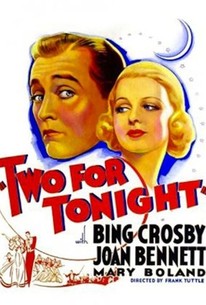 In this musical comedy, a play producer attempts to deal with a temperamental star. Meanwhile, his lovely secretary is courted by a handsome playwright who claims he can write a new musical for the star in a week. Sure enough he does and the producer has a hit on his hands. Songs include: "I Wish I Were Aladdin," "From the Top of Your Head to the Tip of Your Toes," "Without a Word of Warning," "Takes Two to Make a Bargain," "You're Beautiful," and "Two for Tonight."

Charles Arnt
as Benny the Goof

C.L. Sherwood
as Cops in Cafe

Phillips Smalley
as Doctor in Hallway

Critic Reviews for Two for Tonight

There are no critic reviews yet for Two for Tonight. Keep checking Rotten Tomatoes for updates!

There are no featured reviews for Two for Tonight at this time.