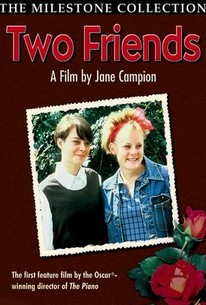 Jane Campion's directorial debut feature, the made-for-TV drama Two Friends, is the story of two 14-year-old girls drifting apart in working-class Australia. Told with an inverted narrative, the friendship is dissolved at the beginning and then moves toward its highest point. As the film opens, high school student Louise (Emma Coles) gets a letter from Kelly (Kris Bedenko), who writes about trying to live on her own after dropping out of school and moving away from home. Louise is disinterested in her former friend, preferring to practice the piano. In episodic segments titled by the change of seasons, the story captures the memorable and distressing moments between the two girls. Both children of divorces, Kelly finds no support from either her lenient father or her demanding stepfather, who refuses to let her attend the same high school as Louise, because he feels it is too elitist. Kelly finds some comfort in Louise's mom, a kindhearted and helpful single parent who lets the girls throw a Christmas party. Two Friends received a theatrical release in the U.S. after the success of Campion's The Piano (1993). ~ Andrea LeVasseur, Rovi

Debra May
as Kelly's Mother Chris

Paul Mason
as Father at Funeral

Martin Armiger
as Philip
View All

Sincere without being cloying, moving without being manipulative. Though often relegated to minor status in Campion's filmography, this is a striking and powerful debut feature.

This early made-for-TV movie is a revelation.

Has something personal to say that is poignant.

There are no featured reviews for Two Friends at this time.