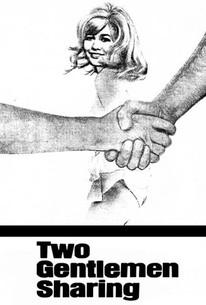 A black Jamaican lawyer shares an apartment with a liberal white man in Two Gentlemen Sharing. Andrew (Hal Frederick), the lawyer, longs to become part of London's middle class while Roddy (Robin Phillips) is the waspish advertising executive who wishes to escape the problems caused by his middle-class upbringing. Both share their views and outlooks on life. Andrew has a difficult time fitting in to the conservative traditions of a prejudiced London, and Roddy finds out his girlfriend has a black stepfather. Roddy is disillusioned when he is not accepted by the black world, and Andrew comes to the realization that he will never be welcomed in the still-racist business community of London. Both men contemplate changes for their lives in this situation comedy with dramatic social insights to race relations and prejudice. ~ Dan Pavlides, Rovi

Gary Sobers
as Cricketer
View All

Ted Kotcheff... directed in a fashion that seems designed to underscore the obvious.

Robin Phillips has just the right naive physique as the well-meaner who bears the major brunt of film's thematics and manages to convince as the white member of the temporary duo, while Hal Frederick is generally very good.

I have to admit, however, that I did enjoy the movie and found myself drawn into it. Director Ted Kotcheff is good with his actors.

There are few surprises on offer, but the film is competently acted.

There are no featured reviews for Two Gentlemen Sharing at this time.