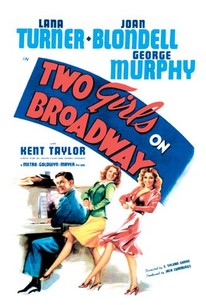 Two Girls on Broadway is an updated reworking of MGM's Oscar-winning 1929 musical Broadway Melody. Joan Blondell and Lana Turner play a vaudeville "sister" act, slightly more talented than the similar duo in Broadway Melody. The twosome have sworn never to break up, but that was before hoofer George Murphy entered the scene. Blondell realizes that it's Turner whom Murphy loves, so she nobly steps aside to make room for her baby sister. Two Girls on Broadway was another step in the right direction for the blossoming career of Lana Turner, here permitted to show off her terpsichorean skills.

May McAvoy
as Secretary

There are no critic reviews yet for Two Girls on Broadway. Keep checking Rotten Tomatoes for updates!

I'll be honest, the main reason to watch this film is the gorgeous Lana Turner, who was just 19 years old when she starred in it. It's not her first film, but it was made just as her career was about to take off. Her acting is a little clumsy in places (as is George Murphy's), but it's a delight to see her dancing, and each of her close-ups. The story is a little thin, and has Joan Blondell and Turner as sisters, who come to New York to try to get jobs on stage with Blondell's slick-talking but affable fiancé, Murphy. Unfortunately, between the two of them, it's only Turner they want, and Blondell is relegated to selling cigarettes. Murphy tries to look out for Turner and shield her from a lecherous playboy (Kent Taylor), but then things get worse for Blondell when Murphy starts falling for Turner himself. There are some nice scenes of Blondell sacrificing herself with a brave face; she does the best she can with the material, and her character is a model of class. Unfortunately, there's also an extended scene with a Japanese butler that has some ugly racism on full display. The film wants to be a comedy, a romance, and a musical, and is pretty average at all three. It's concise at 73 minutes, and I liked seeing Turner and Blondell, but if those two aren't of interest, you should probably skip this one.