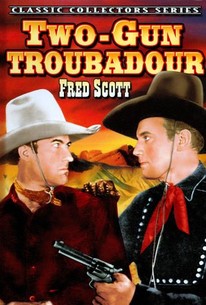 Two Gun Troubador was the third of four Fred Scott westerns produced by veteran "B" specialist C. C. Burr. Singing cowboy Scott may or may not be the "masked troubador" who has been robbing the rich and giving to the poor, all while looking for the man who killed his father. Whatever the case, the hero's assistants include comedy relief Harry Harvey (whose namesake son plays Scott as a boy in the opening reel) and youngster Billy Lenhart, of "Butch and Billy" fame. The songs are above average, the best of lot being "The Cowboy and the Schoolmarm." The Fred Scott series had been inaugurated by, of all people, Stan Laurel, who'd moved on to other things by the time Two GunTroubadour hit the screens in July of 1939.

Harry Harvey Jr.
as Bill Barton as a boy

There are no critic reviews yet for Two Gun Troubadour. Keep checking Rotten Tomatoes for updates!

There are no featured reviews for Two Gun Troubadour at this time.