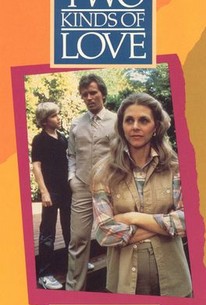 Two Kinds of Love are experienced by young Ricky Schroder in this made-for-TV drama. One kind is the tenuous affection he extends to his estranged father (Peter Weller) when Schroder's mother (Lindsay Wagner) unexpectedly dies. The other kind consists of the teasing sensations felt by Schroder whenever he approaches a girl his own age. Two Kinds of Love was adapted from Two Kinds of Terrible, a novel by Peggy Mann. The film was originally telecast November 8, 1983.

Georg Olden
as Jonas
View All

There are no critic reviews yet for Two Kinds of Love. Keep checking Rotten Tomatoes for updates!

There are no featured reviews for Two Kinds of Love at this time.