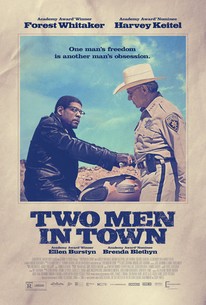 After a troubled youth and 18 years in prison, William Garnett (Forest Whitaker) is being released. With the help of an idealistic parole agent (Brenda Blethyn) and his new-found Islamic faith, Garnett struggles to rebuild his life and overcome the violent impulses which possess him. However, Bill Agati (Harvey Keitel), the Sheriff of the small New Mexico border county where Garnett is released, has other ideas. Convinced that Garnett is unredeemable and is a threat to the security of his county, Agati launches a campaign to return Garnett to prison for life. Also starring Luis Guzman, Dolores Heredia, and Ellen Burstyn. (C) Cohen Media

It'll be easy for some to dismiss this as a familiar story told all too coolly, but look closer and you'll see it has a raging heart.

As exceptional as the acting in the picture is, and it is wonderful ... it can't entirely lift the movie from the rut it has all but plowed into by the end credits.

The desert landscapes are gorgeously shot by Yves Cape, but "Two Men in Town" never seems to fully inhabit its setting. Nor does the schematic, occasionally clumsy story do justice to the skills of the cast.

The setting is striking, the cast impressive. But "Two Men in Town," a drama that's built on dread and circles the question of redemption for a newly released prisoner, falls short of the mythic territory it aspires to.

The movie's melancholic, atmospheric tone, coupled with a muted performance from Whitaker, offers a new way into the material.

Even if the accents are questionable or inconsistent, there's still a sense of place and geography that's rare in contemporary American film. This is the county-sized world of a parolee, where everything seems small except the horizon.

Two Men in Town is a dusty, sun bleached saunter through redemption.

You have to get your enjoyment in bits and pieces, from the mood and the landscape and the performances.

Erratic and confounding in its fractured storytelling, Rachid Bouchareb's first foray into filmmaking in the U.S., 'Two Men in Town,' is a mixed bag.

Frustratingly close to something very special indeed. If only it had a screenplay to match the visuals and performances, we'd be talking about a small classic.

Eventually fails to live up to its initial promise, but as an overview of human frailty, it contains several powerful scenes that allow the cast room to articulate complex emotions in an honest manner.

There are a handful of brilliant scenes (one between Whitaker and his adoptive mother played by Ellen Burstyn stands out), however they're few and far between.

There are no featured audience reviews yet. Click the link below to see what others say about Two Men in Town!