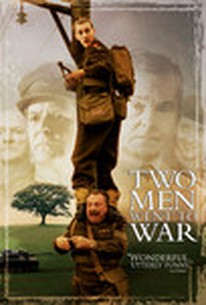 It's 1942 and the Nazis have occupied France. The Battle of Britain is being fought in the skies over London. The British have been routed at Dunkirk--and two army dentists have decided to launch their very own private invasion of France. Based on a true story, Sergeant Peter King of the Army Dental Corps, who's too old to fight, and Private Leslie Cuthbertson, a trainee dental mechanic in the Corps, are both thrown together by their passionate desire to see active service. Armed with just two revolvers and a dozen grenades, King persuades Cuthbertson to join him on a mission to Nazi occupied France.

Jason Round
as Soldier

Henderson's warm and toasty little gem of a film, slight though it may be, reminds you that the Greatest Generation, full of vim, vigor, and -- most important -- an indefatigable sense of purpose, grew up on both sides of the Big Pond.

As straightforward as its title, delivering exactly what you would expect: a pleasant bit of stiff-upper-lip nostalgia with a touch of whimsy.

The mission, which the soldiers codenamed Operation Mad Dog, would have been delicious as a documentary, but director John Henderson goes for an antic Two Stooges Abroad approach.

Wait for Two Men Went to War to go to the small screen.

There is no getting around the fact that Two Men doesn't have quite enough ammunition to sustain its own lunacy or our interest.

Winds up as a charming little entertainment about two lovable, albeit misguided, patriots.

An enjoyable, amusing and unpretentious film about a couple of English eccentrics - dentists whose eccentricity is not evident until their actions gave them away.

Well worth an evening invasion of the art house.

A mish-mashed historical drama sunk by its flattened tone... on the one hand clamorous and eventful but ultimately also quite tedious and tiresome.

A simple dose of nostalgia like this goes down easily.

What an unexpected delight is this true-ish wartime tale of two army dentists determined to do something for the war effort. A grizzled WW1 Sergeant and callow private go AWOL, heading for Cornwall and then to France armed with a rucksack of grenades, a couple of pistols and the odd dental tool. Possessing a comic lightness of touch rarely seen in Britain since the halcyon days of the Ealing comedies, this wonderful tale of British eccentricity is hilariously funny mainly because it never goes for the obvious laugh. Realisitic enough that the adventure is frequently nerve-wracking, with a splendid plot that constantly wrongfoots your guesses, the mismatched comic pair of Kenneth Cranham and Leo Bill work brilliantly. Filmed in vibrant colours so rarely seen in a British film, the movie succeeds way beyond its modest ambitions. It's the rare sort of film that banishes the blues and puts you in a good mood that lasts for ages afterwards. What more can you ask from a film than that?