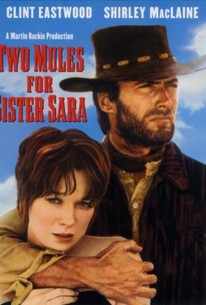 Clint Eastwood is a hard-hitting high plains drifter who rides into town and single-handedly rescues a local nun (Shirley MacLaine) from a gang of attackers. After meeting a band of Mexican revolutionaries bent on resisting the French occupation of Mexico, the cowboy and Sister Sara decide to join forces with the freedom fighters and set off on a deadly mission to capture the enemy's garrison. But along the way, a steamy romance develops between them when the soft-spoken hero discovers the nun is not what she seems. Ending with a violent climax at the well-protected fort, this action-packed western classic cemented Eastwood's status as a true cinematic superstar!

The movie is a lot better than it might have been.

...only a moderate success.

While the two men are best known for subverting the tropes of action pictures, they accomplished something a bit more enticing by casting a wide net and integrating a top tier actor like Shirley MacLaine into their hyper-masculine world.

Clint Eastwood and Shirley MacLaine make an unlikely but surprisingly effective team in this enjoyable Western.

It has a number of things going for it, chief among them a feeling for the landscape of Mexico (photographed by Gabriel Figueroa) which probably has never before been duplicated.

The resurrection of cliches is always a dubious proposition, but the revival of ones that were vulgar from the start strikes me as little short of insanity.

Plenty of drinking, flirtations, and short tempers are shared, and while the movie doesn't offer an overwhelming sense of conflict, sly personalities and chewy western traditions are big enough to capture attention.

OK Eastwood, but MacLaine as bawdy nun is more than a bit too over.

Siegel shoots in beautiful widescreen and keeps the action scrappy and pulpy, just like his best "B" movies.

It shows in a one-joke situation that rapidly wears thin, in tension that doesn't hold up, in acting that is never up to snuff.

Not Clint's best, but a fairly unique and entertaining western.

A vital component of the Siegel-Eastwood connection.

A mildly entertaining Western with funny moments, but the movie's problem lies in a frustrating, illogical revelation that takes place during the third act, something that doesn't make much sense and unfortunately ruins the entire coherence of the story.

An awesome western comedy from Clint Eastwood. For most of the time he is his usual self with his laconic dialogues and his signature snarl. But this time there is a more comic appeal to it, one of the most hilarious scene would be when he keeeps missing his target, looking somewhat stupid and confused, then turns around and asks Sister Sara, "Errr...Can you shoot?"

A film that carries so much promise, but falls way short. Eastwood could've been worse as drifter Hogan, but I did not enjoy MacLaine's presence onscreen. It's a lackluster film in terms of entertainment and dialogue, but the first scene and climax are big thrills. Who would've guessed, both the the scenes I'm referring to include Eastwood doing work with his pistol.

For someone who's a huge fan of the Dollar's Trilogy and considers it the most flawless series of movies to ever exist, this is god's fourth gift to mankind. It's the unofficial sequel and conclusion to The Man With No Name. Don Siegel honors everything about the trilogy and puts his own juice into it, making for a great movie. It's got everything you could want in a western or a Leone treatment; Ennio Morricone score, Clint Eastwood mowing down the bad guys, an amazing finale and beautiful cinematography. The story is really full and so charming, it's the only real time a relationship is brought to the character. It works extremely well and fuels the whole movie. Shirley Maclaine is so funny and adorable next to Clint Eastwood's dirty hero, pretty much a match made in heaven. Now I'll admit that i'm partial to this for many reasons and it won't suit everyone's wants or needs. That being said, I absolutely love it.