Two Weeks in Another Town1962 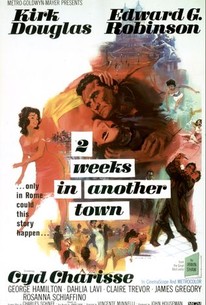 Two Weeks in Another Town Photos

After his career has tapered off, a once-famous actor attempts to overcome his mental and emotional problems to get his life back together. Arriving in Rome to work on a low-budget film, he meets with a fellow actor and the two face a series of problems and setbacks when they try to finish the film project they began. Based on a novel by Irwin Shaw, this drama directed by Vincente Minnelli features Kirk Douglas, George Hamilton, Edward G. Robinson, Cyd Charisse and Claire Trevor among others.

Joe Dante
as Ad Libs in Lounge
View All

Critic Reviews for Two Weeks in Another Town

One of the sharpest and most perceptive movies about the film industry.

The overwrought nature of the film actually suits the larger-than-life canvas on which broad strokes are frequently painted.

Douglas and Robinson struggle doggedly to put some life into their painfully stereotyped roles.

shows the industry in that transition, and in that respect, it's fascinating to watch

Both intimate and outsized, it's a strange product of the era, a Hollywood white elephant of a movie straddling self-awareness and self-parody ...

The culmination of a great career filled with glorious images and deeply-felt emotions.

A passable sequel to Minnelli's 1952 Hollywood melodrama The Bad and Beautiful, and while Kirk Douglas and Edward G. Robinson give expert performances, Cyd Charisse is miscast.

The film borders on soap opera but manages to get beyond it because of Minnelli' skills as a director and the fine acting from the two male leads.

Audience Reviews for Two Weeks in Another Town

This may not be the best movie about the film business but it's probably my favorite. The links to Minnelli's earlier and more critically lauded "The Bad And The Beautiful" are strangely incestuous. It's not a direct sequel, here Douglas plays an actor, not the wildly driven producer of the earlier film. In fact Douglas' character here is actually supposed to be the actor who played his character in "TBATB". (Confused? Best not to think about it too much and go with the flow.) This is revealed when Robinson, who we are told directed "TBATB", screens a print of the film as an example of great work. If Minnelli lacked anything it certainly wasn't ego, not many would have the balls to make a movie about how great the one you made ten years ago was. Few would agree but I feel this superior to the 1952 film. There's something beautifully melancholic about this movie. In 1962 Hollywood was undergoing a radical change, competition was coming from TV, Rock & Roll, and from Europe where movies could be made for a relative pittance. A whole new breed of performers were changing the craft of acting. Realism was becoming key, audiences wanted to see movies shot in a glamorous location rather than a warehouse in Los Angeles. If any movie can serve as a farewell to old Hollywood it's this one. Douglas, Robinson and Charisse all play characters who know the game is up, all three on the verge of becoming dinosaurs. Douglas is the only one who faces up to it with dignity. He ends a brief May to December fling with the stunning Daliah Lavi, pushing her back to the handsome but troublesome young actor Hamilton who she claims was her first love. In doing this Douglas is speaking for Minnelli's generation, passing the reigns onto the new young Hollywood which would emerge over the following decade. Relapsing into alcoholism after a wild night with Charisse, Douglas speeds off in his Maserati with her in tow, threatening to kill both of them by driving wildly. Minnelli filmed this on stage in front of a rather obvious projection screen which gives the scene another level. Douglas at this point doesn't want to face reality so subconsciously is trying to escape into the movie world, the only place he ever felt safe. It recalls a similar scene from "TBATB" where Lana Turner sped off after being rebuked by Douglas. This is probably the last great role for Robinson before he was swept away in a sea of TV bit parts and he's on fire here as the bitter director who can't accept his time is up. Douglas is great as always and really generates sympathy as he attempts to keep his dignity while all around him lose theirs. It makes sense that this was a commercial failure as it legitimizes the movie's theme. What I can't understand is the overwhelming critical bashing it took. Perhaps it was Minnelli's undeserved stigma as a director of musicals. I can't help think if this had been made by Wilder or Sirk it would have far greater standing. Don't believe the anti-hype, this is one of the best movies of the sixties and a must see for fans of old school melodramas.

Two Weeks in Another Town Quotes