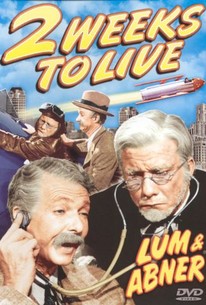 The title of this "Lum 'N' Abner" comedy isn't explained until the film is half over. Chester Lauck and Norris Goff repeat their radio characterizations of Lum and Abner, proprietors of the Jot-Em-Down Store in Pine Bluff, Arkansas. This time, the boys journey to Chicago, where Abner hopes to collect his share of an inheritance, only to find out that they're responsible for their "benefactor's" debts. Required to take a medical exam, Abner is incorrectly informed that he has only two weeks to live (from the motion picture of the same name). In their efforts to raise enough money to square their debts, Our Heroes get mixed up with a Nazi spy ring. When this plot point is abruptly dropped (indeed, it looks as though the script was being made up as it went along), Abner agrees to take an experimental rocket trip to Mars for a huge cash sum. The climactic special effects are as ridiculous as the rest of the film; even so, Two Weeks to Live did well at the box-office thanks to the popularity of the Lum 'N' Abner radio show.

Charles B. Middleton
as Kelton

There are no critic reviews yet for Two Weeks to Live. Keep checking Rotten Tomatoes for updates!

There are no featured reviews for Two Weeks to Live at this time.