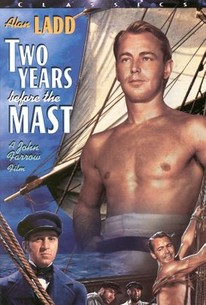 Two Years Before the Mast Photos

Based on a famous book by Richard Henry Dana, Jr., this grueling saga of shipboard oppression is set in the mid-19th century. Charles Stewart (Alan Ladd), the wealthy son of a Boston shipowner, is hijacked by Amazeen (William Bendix), the first mate on a ship bound for California. Francis Thompson (Howard Da Silva) is the tyrannical captain of the Pilgrim who was booted out of the U.S. Navy for mistreating his sailors. Now he wants to set a record sailing time, and he and Amazeen mete out severe punishment for the slightest of infractions. They even deny the men permission to go ashore and pick fruit when they stop in California and pick up the beautiful Maria Dominguez (Esther Fitzgerald). Without fruit, the men develop scurvy and begin to mutiny. Stewart allies himself with the author Dana (Brian Donlevy), whose brother died on one of Captain Thompson's previous voyages. Dana wants to write an expose of Thompson. Stewart steals guns and tries to take over the ship, but Amazeen subdues and imprisons him. The film was shot on a Hollywood set, but with devices on the set that simulate rolling waves so effectively that much of the cast got seasick.

James Flavin
as Crimp with Amazeen

Stanley Andrews
as Policeman
View All

Critic Reviews for Two Years Before the Mast

It's played to the hilt all around.

The ensemble drama was effective largely because of the superb acting, the salty dialogue and the strong direction that kept things authentic.

There are no featured reviews for Two Years Before the Mast at this time.

Two Years Before the Mast Quotes