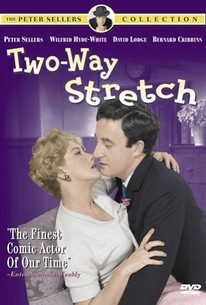 Peter Sellers stars as an inmate in a "model prison" run by Maurice Denham. Though Sellers is disinclined to escape (he's never been as comfortable in his life), he is convinced to do so by phony vicar Wilfred Hyde-White, who breaks into jail to outline a robbery scheme. Hyde-White's plan is to have Sellers and his cellmates David Lodge and Bernard Cribbins take a brief "vacation" from jail, pull off a big-time robbery, then return undetected to prison, thereby establishing a perfect alibi. Within its 87-minute time span, Two-Way Stretch takes satirical potshots at political bleeding hearts, obese Middle Eastern potentates, and regulation-bound British police officials. One cannot be faulted for wishing that Peter Sellers had stuck to engaging small-scale British farces such as this and had never ventured into such unamusing big-budgeters as The Bobo and There's a Girl in My Soup.

John Glyn-Jones
as The Lawyer

Olga Dickie
as Woman in Pub

Larry Taylor
as Warder at Rockhampton

Edward Dentith
as Detective
View All

The result is a hilarious crook farce, nicely free of strain and frenzy from start to finish.

Delightful, dry comedy with an appeal not unlike a British version of "Hogan's Heroes." The always chipper Wilfred Hyde-White shines even more than Peter Sellers. Alas, the ending is a bit unsatisfying.