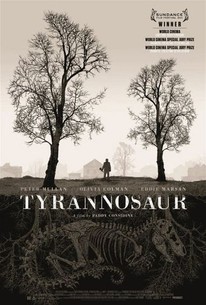 Joseph (Peter Mullan) is an unemployed widower with a drinking problem, a man crippled by his own volatile temperament and furious anger. Hannah (Olivia Colman) is a Christian worker at a charity shop, a respectable woman who seems wholesome and happy. When circumstance brings the pair together, Hannah appears as Joseph's guardian angel, tempering his fury and offering him warmth, kindness and acceptance. As their relationship develops, Hannah's own secrets are revealed - her husband (Eddie Marsan) is violent and abusive - and Joseph emerges as her unlikely savior. With striking performances and a deeply felt story, actor-turned-writer/director Paddy Considine's film is a stunning debut about the emergence of grace and redemption from the least likely of places. -- (C) Strand Releasing

Fiona Carnegie
as Woman in Shop

The movie is cruelly frank about the ways damage cascades down to the powerless, but while it's not for the fainthearted (or for animal lovers), rewards are there.

More so, as familiar as a lot of this Considine does a great job of making it feel fresh and original even if little of it actually is, giving his finished film a lived-in quality that's undeniable.

The principals are superb, with Mullan and Colman doing a masterful job of inhabiting their separate but equal prisons.

You won't find two finer performances in recent times than those by Mullan and Colman, who in a perfect world would each have received Oscar nominations this week.

If the script ultimately seems a bit extreme (are there no immediate consequences for Joseph's tantrums or the criminal outbursts of Hannah's abusive husband?), it's often surprisingly successful in pushing the limits of British kitchen-sink drama.

A hard and heavy watch -- for late teens and adults only -- this is a film that will floor audiences with its powerful performances and grim storytelling.

It is, in my opinion, a devastating drama about the volatility of human morality. [Full review in Spanish]

Grim, grizzled, and depressing. At times the hopelessness can be overwhelming, almost oppressive. Everyone is stuck. Everyone is broken. Everyone is desperate. However, even within the weighty bleakness, Considine paints a poetic picture.

Tyrranosaur is one of those movies that makes you wonder how, and why, it ever got made, and who on earth will see it.

At times this is a film you may want to look away from, even if its little speckles of violence aren't explicit and graphically shown. But Considine knows: we must look.

A devastating, emotionally exhausting film, directed and acted with such humour, sadness, and terrible beauty. A really unforgettable film. Paddy Considine is fantastic.

The shocking, gut-wrenching first 60 seconds continues on through the end. What makes it bearable to watch is that all of the aggressors are just as horrified by their own actions. There is no redemption found here, just a coping self-awareness of the controllable contributing factors.

Absolutely NOT for the faint of heart (or children, for that matter). Be warned - for those who rely on the US Motion Picture Rating scale to prepare them for a film - this is a clear "R" for language, violence, and adult themes. This movie goes way beyond dark, and gritty. Opening scene: angry drunk walks out of a bar and takes out his frustrations on his dog..badly. The rest of the story is just as about as pleasant. However, it is so well done that it's really hard to judge how you feel about it all by the end...

'Tyrannosaur'. Two destructive personalities?one less inwardly so than the other, but to far greater consequences?find some semblance of peace through each other. Fine performances from both leads, and great little moments of humour to break up the bleak tone of the film, especially the explanation of the name, 'Tyrannosaur'! A day later, in retrospect, I do question whether Joseph's violently destructive motivations and character were sufficiently conveyed to the viewer. Did I miss something, or did he get this way just because [and I don't mean this lightly] he lost his wife? If so, the message seems to be about glamourising rage in Joseph's case, for no real just cause, whereas at least Hannah garnered some level of sympathy and was almost driven to it.