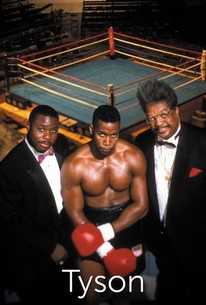 This made-for-television movie tells the story of the tumultuous life of heavyweight boxing champ Mike Tyson. The movie follows the boxer (played by Michael Jai White) from his early New York youth as criminal offender all the way to his years as a national boxing celebrity. With the help of controversial promoter Don King (Paul Winfield), Tyson became the World Heavyweight Champion, only to lose it all and go to jail for a rape conviction. This biopic was based on Jose Torres' book on Tyson, Fire and Fear.

George C. Scott
as Cus D'Amato

James B. Sikking
as Bill Clayton

Miguel Pérez
as Reporter
View All

The most remarkable revelation of the movie is its subject's thoughtful, reflective eloquence and unflinching self-perception.

A deft combination of Tyson telling his story, his boxing matches and the media view from the day makes this a left-right combo punch that hits the mark for both boxing and documentary fans

It's more in the details and in the margins that "Tyson" is riveting, and what Tyson sometimes reveals unintentionally.

Mike Tyson is the James Joyce of train-wreck celebrities. Seriously. Sure, he's tough to read just like the literary giant, but once you get comfortable and crack his stream-of-conscious flow, it's rich and compelling stuff.

There are no featured reviews for Tyson at this time.