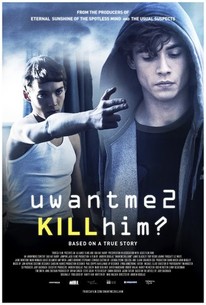 U Want Me 2 Kill Him? Photos

16-year-old Mark meets local girl Rachel on the internet, he begins an intense online relationship. He quickly finds that he's besotted, that he'll do anything for her, even befriend her awkward, loner brother, John. When Rachel, who is trapped within the grips of a possessive boyfriend, is murdered, Mark and John make plans to avenge her death. Their actions draw the attention of a secret government department as they unwittingly stumble upon an ongoing operation. Soon Mark is recruited to commit a crime that made British legal history. Based on true events in the UK in 2003, this is the story of a friendship of opposites and the hidden evils that lurk deep within the Internet.

Charles De'Ath
as Teacher in Corridor

Maddy Hill
as Check Out Girl

Hannah Douglass
as Girl on Beach

Hannah Douglas
as Girl on Beach
View All

News & Interviews for U Want Me 2 Kill Him?

View All U Want Me 2 Kill Him? News

Critic Reviews for U Want Me 2 Kill Him?

[Director Andrew Douglas] is only partially successful at depicting its many twists and turns in convincing fashion. But it's compelling nonetheless, if only for the sheer bizarreness of the events depicted.

It's effective, in its way, and the acting is excellent, across the board. But "U Want Me 2 Kill Him" side-steps the real fascination with the story, its real guts, which is: Why?

Andrew Douglas, who directed the 2005 "The Amityville Horror" remake, mishandles the standard noir as straightforward drama and gives it an unfortunate after-school-special vibe.

A compelling but ultimately unsatisfying film.

Even with its sloppy second act, the narrative picks up enough momentum to power it through to a creepy conclusion.

The evils of the internet are unnervingly unearthed in this teen-oriented thriller.

Gripping, hypnotic and unassuming, Uwantme2KILLhim? takes its teen angst-ridden tendencies to a whole new deceptive level...a telling and toxic message in the mainstream culture of today's teen alienation and dependency on stand-by technology

Viewers may feel they have been intentionally misled. Well, they have.

If Spike Jonze's Her seeks to destigmatize and legitimize the existence of online relationships, Douglas's U Want Me 2 Kill Him? seeks to do the opposite.

A slick, taut, reality-based little cyber-thriller that may be a mite dated in technological terms but still fascinates because of its sheer luridness.

The bad news is that uwantme2killhim? is less engaging than the 2005 Vanity Fair article on which it's based. After the bizarre and sadly sordid details of the real-life story are smoothed away, what's left feels both familiar and simplistic.

Audience Reviews for U Want Me 2 Kill Him?

There are no featured audience reviews yet. Click the link below to see what others say about U Want Me 2 Kill Him?!

U Want Me 2 Kill Him? Quotes