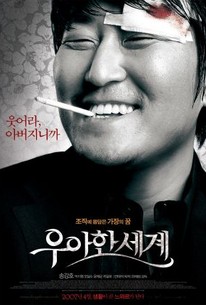 A ruthless gangster who uses his brutality to rise through the ranks suddenly finds his life complicated on all sides in this hit Korean crime drama directed by Han Jae-rim (Rules of Dating) and starring Song Kang-ho) (The Host). In-gu (Jae-rin) is a low-level gangster who's more than willing to crack some skulls in order to get an edge on the competition. Lately, In-gu's life has been a steady regiment of roughing up rivals with steel pipes, and busting up construction sites with baseball bats. Upon recovering from his battle wounds, In-gu stumbles out of the smoky karaoke rooms where he spends the majority of his time, and makes his way back home to visit with the family. In-gu's daughter detests her father for strong-arming her teachers with cash and threats, and his wife has made it clear that he's no longer welcome in what was once the couple's bed. Soon, a rapidly snowballing series of events both at home and at on the job find the hapless gangster beset by intense complications that could finally drag him under. ~ Jason Buchanan, Rovi

Critic Reviews for Uahan segye (The Show Must Go On)

There are no critic reviews yet for Uahan segye (The Show Must Go On). Keep checking Rotten Tomatoes for updates!

Audience Reviews for Uahan segye (The Show Must Go On)

While I'm a huge fan of Song Kang-Ho...this isn't a good movie at all despite a, typically, strong performance from Kang. I just think the movie is really quite dull to watch and there's no real story to it for most of the time. I think it gets better as it nears the end when you see how hard Kang tries to quit 'the life' for the sake of his family just so at the end, he's right back where he started. But the movie waits until it's too late and it ends up being just an average movie.

Uahan segye (The Show Must Go On) Quotes