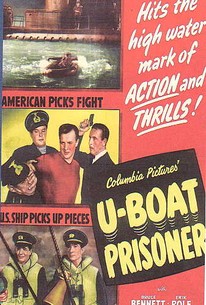 All-purpose Columbia contractee Bruce Bennett (formerly college athlete Herman Brix) was awarded a leading role in the wartime "B" U-Boat Prisoner. Bennett plays merchant seaman Archie Gibbs, who manages to survive when his ship is torpedoed by a German submarine. Disguising himself in the uniform of a dead Nazi spy, Gibbs is picked up by the Nazi U-boat. He manages to convince the German sailors that he's the spy, and in this guise he tries to rescue a group of captured Allied scientists. Already unbelievable, U-Boat Prisoner journeys into the Twilight Zone during the climax, with Gibbs single-handedly incapacitating the submarine crew and rescuing the prisoners. Incredibly, the film was based on a true story, written by the real-life Archie Gibbs!

Robert B. Williams
as Cmdr. Bristol

Bruce Bennett, Erick Rolf, John Abbott, John Wengraf and Robert Williams carry the weight of the work, in which the action is so interesting you don't miss the absence of of any women in [the film]. [Full review in Spanish] Woman in her.

There are no featured reviews for U-Boat Prisoner at this time.