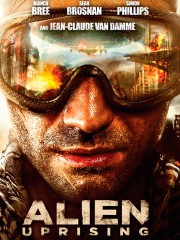 Matt S
November 12, 2018
Drags a bit but the ladies are hot one being van damme's daughter. Van damme has some very limited scenes in the movie's closing arch but an OK sci-fi channel esk movie.

Mitch R
½ April 23, 2017
What a failure of a movie. The director could have made the body of the film so much better and don't get me started on the ending, just as stupid as blare witches ending ??

Simon D
May 14, 2016
A low budget English sci-fi which basically looks like an episode of hollyoaks with some spaceships. Will surely be a huge disappointment to sci-fi fans and everyone else too probably.

Uli W
½ September 20, 2015
A wonderful B-movie starring Jean-Claude van Damme showing martial arts against aliens for nearly ten minutes before he dies. Maybe thats why acting and shooting is quite good, the special effects are well drawn, but not realistic. There was no script continuity, some things just "appear" after the next cut. That's fun.

And, there are much flying saucers to see sometimes. When you see some flying, there are definitely too much in the sky. Also the end is remarkable, but i don't tell you why. If you like B-movies, you will have fun. Lots of fun.

Harry W
½ May 20, 2014
To put it blankly, I pretty much expected UFO to be crap and watched it solely on the basis of the fact that it had Jean-Claude Van Damme in it. I hoped that it might be a good bad film like something from Asylum or Syfy.

It didn't take long in UFO before I began to ask myself the question "just what the hell am I watching?". It is clear that UFO has a low budget, an incredibly low budget which is reinforced by shoddy acting, lacklustre scripting and a genuine sense of stupidity.
It is actually painful to watch UFO because the film is so bad. There is a lot of waiting around to do while the actors fail to create entertaining characters out of the poor script and aren't even bad enough to be entertaining. They are terrible, but all in the wrong and most boring ways. The characters are just so awful and annoying that you really want them to die, and their motives for random activities is so senseless and ridiculous that it severely damages the entire film. The actors aren't even worth having their names listed and it would be better to simply try and forget their faces, with the only thing worth mentioning being tat Sean Brosnan proves that talent does not run in his family.
At one point the script and whoever the terrible actor that says the line is makes use of the infamous line from the BBC comedy show Extras "you havin' a laugh?" which shows just how pathetic and desperate the screenwriters are. This is one of the few memorable lines in the script with the other being the last thing that Jean-Claude Van Damme says before his character dies. The rest is painfully cringe worthy writing which gives ridiculously senseless situations for the actors to deal with, and all they can do from there is prove that they are simply not up for the challenge. Nobody in UFO is actually up to making a film, and so the fact that they went ahead and did it anyway is the price that viewers have to pay for the ambition of others. Though others do not have to watch it, and they really should not bother trying, even if like me you are a fan of Jean-Claude Van Damme and will watch anything with him in it.
UFO is just a very inexperienced production. There are times where you can actually see the same shots being used over again to no benefit whatsoever in random moments, and they are edited horribly. The cinematography itself is excessively shaky at times in UFO, and the editing is no better. While it doesn't really make the already terrible film that much worse, it certainly doesn't allow for any more pleasurable viewing. UFO just starts off bad and manages to find new ways of getting worse every minute. The film isn't the slightest bit convincing as an alien invasion film because there is no atmosphere whatsoever, and the characters are not compelling at all. So the film is not a good visual experience nor is it entertaining for being stupid enough. It is just painfully slow and repetitive from start to finish without a sense of what it should be doing because it is just excessively misguided.
UFO takes itself way too seriously. It is an example of a film which is poor but the creators don't know how poor it is or attempt to play that off as a gimmick. But the saddening thing is that the visual effects are actually pretty decent. I mean, if UFO used more of its visual effects and less of its terrible cast, it would be a hell of a lot better because the visual effects are superior even to any film by Asylum or Syfy, and yet they are given the most brief moments of screen time. The last image of the film is of the potential that the visual effects had, and then suddenly its over and viewers realise that the filmmakers actually had some potential to be making a slightly half-decent film which they seriously wasted.
You can tell that even Jean-Claude Van Damme is aware that UFO is serious crap because he doesn't try in the film. And beause he doesn't try, he gives the best performance in UFO. UFO is packed to the brim with untalented actors who go over the top so often because they try too hard while being blinded by their lack of talent. Jean-Claude Van Damme clearly does not give a f*ck and is only in the film to either earn a quick buck or satisfy some fans of his work, and in the process he gives the best performance of the entire cast without even lifting a finger. And it isn't even one of his better performances because it is a cheap routine effort which is limited to a very short period of screen time. So if you're interested in seeing UFO, remember these precise words: "Jean-Claude Van Damme clearly does not care about the film enough to even try and act, and he therefore gives the best performance of the truly dreadful cast." Though UFO is even too dumb to take advantage of his action hero status and doesn't get him to kick any ass. So UFO is more of a waste of Jean-Claude Van Damme's talents than it is a waste of the viewer's time, which is a fairly tough call to make. But I'm gonna call it anyway, because it is clear that he has less fun in the film than audiences do watching it.

So UFO is a terrible film which is thoroughly boring for every conceivable reason, including wasting the talents of Jean-Claude Van Damme and some good visual effects, on a terrible script and absolutely horrendous acting. It cannot establish an atmosphere or anything believable about it and seems to have been shot by The Blair Witch Production crew while on some kind of acid trip in which they thought they were creating a good film.

Marko S
October 19, 2013
Not even the techno music could save this.

William C
April 13, 2013
One of my guiding principles is never to eat anything that has more than four legs and doesn't have a face . . . . . another is to never watch a movie that contains Stephen Seagal, Daft Lindgren or Jean Claude van Damme . . . . I broke the latter rule last night - the above movie came into the Animal Rescue shop last week and I put some money in the till for it . . . . . look at the DVD cover . . . . a multitude of spaceships and exploding cities . . . . . an exciting movie you tell yourself . . . . give Jean Claude van Damme a chance . . . . .The entire movie consists of six people arguing and shagging (please excuse the language, but sometimes you just have to use the 'F' word) in a variety of locations . . . . . You never see an alien . . . OK, one of their number turns out to be a member of the alien race for the last five minutes of the film but she has no more than her usual two legs and arms and definitely has a pretty face - but not even a pretence at Dr Who-style makeup . . . . . And the only alien spaceship is an unusual angle shot of what looks like a modern light fitting . . . . . with bits of ribbon hanging off it . . . .

John R
March 25, 2013
Terrible, amateurish film. Feels like a bad home movie for most of its boring length. The characters bicker and fight and you hate them all. After what seems like an age, some special effects appear but they are not used in an effective or even comprehensible way. Van Damme appears briefly, God knows why, looking shamefaced to be in this pile of cack. The ending is annoyingly meaningless. The director/writer apparently can't direct or write dialogue. Really, this man must never be given money to make a movie again.

Cosmo S
½ January 24, 2013
Dear UFO, please kill as these characters and the director and producers.

Shane J
January 3, 2013
pierce brosnan's son and vandammes daughter get mixed up in aliens taking over the world in this low budget British scifi flick. it actually starts pretty good but like the similar skyline has no idea how to finish the premise. the last half hour seems to turn the film completely on its head just for kicks. talking of kicks there does seem to be some martial arts fights just for good measure and jean Claude van damme has a cameo which he seems to be having fun with. also him and his daughter have a smackdown as well. his daughters bloody fit as well!
Page 1 of 1