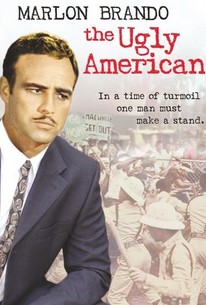 Based on the novel by William J. Lederer, Marlon Brando stars as a U.S. ambassador to a small Asian country who arrives to find political battles brewing; a communist rebellion threatens the construction of an American financed highway.

Critic Reviews for The Ugly American

Brando is excellent, as is Okada (notwithstanding his Japanese ethnicity) as the two old friends find themselves on opposing political sides - both right, both wrong

Too talky, conventional, vague and ponderous.

Audience Reviews for The Ugly American

If only President Johnson had watched and understood this film.

Englund's direction fails to spark any excitement in the audience, but Brando's volatile and passionately emotional performance keeps the film afloat. An interesting enough story and impressive enough acting that I would say this is a must-see for any Brando fan.