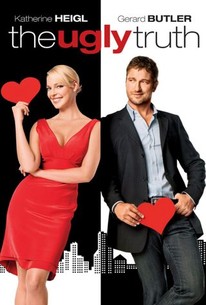 Critics Consensus: Despite the best efforts of Butler and Heigl, The Ugly Truth suffers from a weak script that relies on romantic comedy formula, with little charm or comedic payoff.

Critics Consensus: Despite the best efforts of Butler and Heigl, The Ugly Truth suffers from a weak script that relies on romantic comedy formula, with little charm or comedic payoff.

Critic Consensus: Despite the best efforts of Butler and Heigl, The Ugly Truth suffers from a weak script that relies on romantic comedy formula, with little charm or comedic payoff.

Katherine Heigl stars as a lovelorn television producer who's made to run a gauntlet of romantic exploits by a pig-headed morning-show host (played by Gerard Butler) as a way to prove whose romantic methods are more accurate. Legally Blonde's Robert Luketic directs from a script by Karen McCullah Lutz, Kirsten Smith, and Nicole Eastman. ~ Jeremy Wheeler, Rovi

Craig Ferguson
as Himself

News & Interviews for The Ugly Truth

View All The Ugly Truth News

Critic Reviews for The Ugly Truth

Heigl is said to have fallen out with Apatow since the making of Knocked Up. Maybe she should reconnect with him.

The film is desperate to be edgy, but its attempts at adult humour are woefully misjudged.

The ugly truth about this insipid romcom is that Katherine Heigl and Gerard Butler are entirely wasted.

It's not as risqué as it wishes it were, nor as likable as it should be. Butler's rarely been better-cast, but the material's too patchy to support him .

We're left with a few giggles and the option to be offended by the gender stereotypes - if we can be bothered.

By the end, you actually want these two cardboard cutouts to get together.

...everything that could snarl up happens here; unsympathetic leads, silly scenarios, a wealth of sexual crudity and a debatable truth about men and women that ends up feeling rather...ugly...

Choppy, inconsistent, and largely unsatisfying despite the presence of two winning performers.

Every point I am giving this film is because of Gerard Butler. He's not only extremely easy on the eyes, but he is a wonderful actor. He gives great edge and intense vulnerability to a role he could have easily phoned in.

The Ugly Truth is actually a very fresh film, one that could be the start of a new genre - the R-rated romantic comedy that appeals as much to men as to women.

The only surprise here is that the misogynistic screenplay was written by three females.

Audience Reviews for The Ugly Truth

This was so funny. First ten minutes or so didn't think it was going to be very good, but then it really picks up. Good chick flick . Couldn't stop laughing at a few of the bits in this. Didn't really like Gerard Butler, but I could overlook that.

The Ugly Truth has all the honesty and romance of an Axe body spray commercial.

Not that funny at all, formulaic, and unlikely. All the sexist, raunchy jokes are just not that funny and while these actors can act, they're just given crap to work with.

Pretty good comedy. Mike is a beer-drinking, woman-chasing loudmouth who has a part on Abby's morning show as the guy who spills the ugly truth on the relationship between men and women. Abby gets some help from Mike to help her attract a neighbour as a date, and of course, Mike finds out there is more the Abby than he first thought.