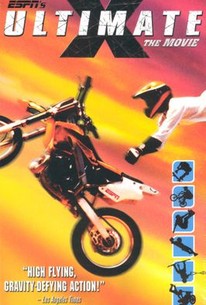 In August, 2001, the Summer X Games came to the city of Brotherly Love, Philadelphia, Pennsylvania, and some of the world's greatest extreme athletes arrived to show off their skills in motocross, BMX, skateboarding, street luge, and many other events. Ultimate X is a documentary (produced by the ESPN cable network) which collects exciting highlights from the X Games competition, with Buckey Laskek, Bob Burnquist, Dave Mirra, T.J. Lavin, Brian Deegan, and many others giving their all to prove who's the best. The film also includes a cutting edge soundtrack, featuring music from Pennywise, P.O.D., and much more.

The competitors are clearly unhinged, but they put on a hell of a show.

This Imax sports documentary captures the danger, thrills, spills and sheer altitude attained by the young men and women who put it all on the line for burgeoning 'Xtreme sports' movement.

The film contains so much eye-popping footage that even viewers who have never seen the X Games can't help but be fascinated.

Writer/director Bruce Hendricks subtracts from the experience by crafting a corporate propaganda film posing as a documentary.

At 40 minutes, it's brief but keeps firmly to its action remit.

Uses the IMAX screen to showcase sports rather than talking heads, and the result is 40 minutes crammed with high-energy acrobatics.

If you think that "ESPN's Ultimate X" is a motor oil, then you need to see this movie, dude.

If you're an extreme sports fan, this is probably a must own DVD.

A love letter for fans of the sport, and for the uninitiated earth-bound, a peek into a strange new sports world spinning with adrenaline.

It briefly flirts with player masochism, but the point of real interest -- audience sadism -- is evaded completely.

It's a dizzyingly entertaining thrill-ride, complete with a pleasantly surprising amount of humor and self-parody.

There are no featured reviews for Ultimate X: The Movie at this time.