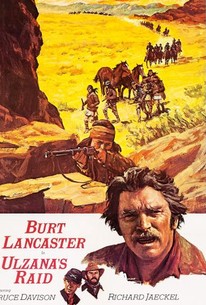 Set in Arizona in the late 19th century, a cynical scout and an idealistic U.S. Cavalry lieutenant set out to catch a group of Apache renegades lead by the chieftain Ulzana. This drama offers food for thought about American military policies and questions the once-popular American tenets of patriotism and racism.

The film is particularly pointed in its measured look at how the myopia of people hailing from different cultures can only lead to fear and loathing, death and destruction.

It is an exciting, suspenseful film made with thorough professionalism.

One of Aldrich's finest films, this underestimated Western presents a bleak yet intelligent portrait of the racial warfare of the white men vs. Native Americans and also serves as effective and damning allegory of the American involvement in Vietnam.

A superior western though somewhat ponderous and its action sequences are formulaic.

Robert Aldrich's allegorical "Ulzana's Raid" is a brutal, bleak Western that uses the harsh Arizona landscape and its unforgiving Apache inhabitants as a metaphor for the Vietnam War. The tone is consistently nihilistic and downbeat, and a constant reminder that bad things will happen and few will be able to stop them. Burt Lancaster is wise and world-weary as McIntosh, an aging scout, and for 1972, the level of violence is shocking.