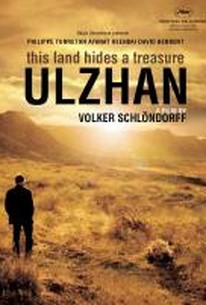 Five-star German director Volker Schlondorff (The Tin Drum, Swann in Love) helms the deliberately-paced existential drama Ulzhat, from a script authored by the famed Jean-Claude Carriere (The Mahabharata). As the film opens, world-weary Parisian schoolteacher Charles Simon (Philippe Torreton) leaves the City of Lights, hits the road and drives east, intentions and destination undeclared. Soon after Charles crosses the Kazakhstani border and his car runs out of gas, he climbs out of the vehicle and begins walking, refusing each driver who stops and offers a ride. In time, it becomes apparent that he is journeying to Khan Tengri, a mountain in Asia, regarded by many shamans as a holy ground - not for spiritual enlightenment, as might be expected, but to find a rumored cache of gold. Though the traveler practically insists on journeying alone (for obvious reasons), he is soon joined in his quest by two eccentrics: a Kazakhstani woman named Ulzhat, who teaches French at a local village school, and Shakuni (David Bennent of The Tin Drum), a hippie-turned-shaman from western Europe. ~ Nathan Southern, Rovi

There are no critic reviews yet for Ulzhan. Keep checking Rotten Tomatoes for updates!