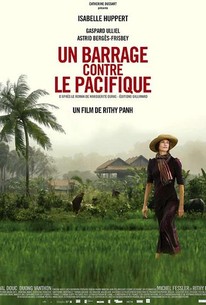 This distinguished outing constitutes Cambodian director Rithy Pahn's feature adaptation of Marguerite Duras' 1950 novel of the same name (a tome typically perceived as a predecessor to her better-known volume The Lover). Panh relies on the material to provide a panoramic overview of his native country, within the context of a fictional narrative. The film, like the novel, unfolds in Duras' temporarily adopted home of French Indochina circa 1931, occupied by a bevy of French estate owners. Surrounded by the polar extremes of colonialist wealth and indigenous poverty, a young French widow (Isabelle Huppert) and her two adolescent children (a son and a daughter) attempt to carve out a meager life for themselves by farming rice fields alongside the ocean. Their efforts are hampered each year by the presence of the sea, which invariably floods the fields with saltwater and wipes out the crops. In desperation, the mother realizes that their only hope lies in the construction of a sea wall to prevent continued flooding, but the mother must cut a swath through the local bureaucracy in an almost Sisyphean attempt to make this happen. Meanwhile, her obstinate daughter, Suzanne, draws the romantic obsessions of a well-to-do Chinese gentleman, Monsieur Jo; though he could easily provide a way out, the possibility of a romantic relationship between Jo and Suzanne could just as easily fall prey to local racial prejudices that would damage or ruin the lives of both. ~ Nathan Southern, Rovi

There are no critic reviews yet for Un Barrage Contre le Pacifique (The Sea Wall). Keep checking Rotten Tomatoes for updates!

There are no featured audience reviews yet. Click the link below to see what others say about Un Barrage Contre le Pacifique (The Sea Wall)!