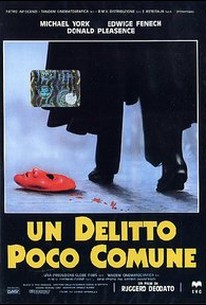 This Italian production was released directly to video, despite the casting of several well-known stars in leading roles. It is also somewhat remarkable for having no less than five alternate titles. In the story, Robert Domenici (Michael York) is a concert pianist suffering from a rare disease which produces super-rapid aging. On a visit to Venice during festival season he decides to take revenge on the world by killing and dismembering former girlfriends. He is nearly impossible to trace, as any description of his appearance rapidly becomes inaccurate. However, he meets his match in the wily Inspector Downey (Donald Pleasance), who persistently pursues him. This mild horror film also features Edwige Fenech, whose uncertain English has great charm. ~ Clarke Fountain, Rovi

There are no critic reviews yet for Un Delitto poco comune (Off Balance) (Phantom of Death). Keep checking Rotten Tomatoes for updates!

There are no featured reviews for Un Delitto poco comune (Off Balance) (Phantom of Death) at this time.