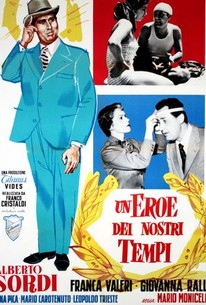 This routine drama set in post-war Italy is the first feature by novice director Sergio Capogna and is based on a best-selling novel by Vasco Pratolini. The story centers around one main protagonist, a young man (Massimo Tonna) who in addition to growing into adulthood, has to come to grips with the post-war conditions in the country. Not overly long on morality at first, he opts for seducing an older widow with the sole intent of stealing as much from her as he can. He follows his plan all the way to the end, with tragic consequences that he did not foresee -- and a lesson learned, too late.

There are no critic reviews yet for Un Eroe Dei Nostri Tempi. Keep checking Rotten Tomatoes for updates!

There are no featured reviews for Un Eroe Dei Nostri Tempi at this time.