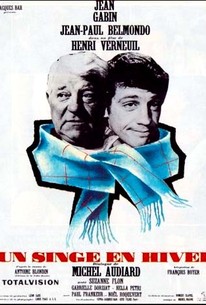 Latent forces for a strong individualism are pitted against the need to honor deeply held commitments in this effective comedy by Henri Verneuil. Jean Gabin and Jean-Paul Belmondo star as Albert and Gabriel, respectively. Albert is an inn owner who vowed never to drink again if he and his wife survived the war. They did, and the reformed alcoholic keeps his vow. But times have changed and soon after the war, Albert comes in contact with Gabriel, a young man prone to heavy bouts with the bottle. Gabriel is conflicted over visiting his young daughter in a nearby school and in a moment of nostalgia, Albert takes off with him on one major binge -- and havoc results. ~ Eleanor Mannikka, Rovi

André Dalibert
as Chief of Police

There are no critic reviews yet for Un singe en hiver (A Monkey in Winter) (It's Hot in Hell). Keep checking Rotten Tomatoes for updates!

There are no featured reviews for Un singe en hiver (A Monkey in Winter) (It's Hot in Hell) at this time.