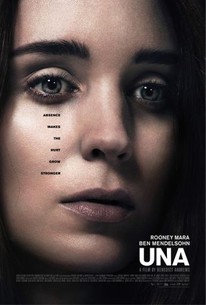 "Una" follows a young woman's journey to reclaim her past. Fifteen years earlier, Una ran away with an older man, Ray, a crime for which he was arrested and imprisoned. When she comes across a photo of him in a trade magazine, Una tracks him down and turns up at his workplace. Her abrupt arrival threatens to destroy Ray's new life and derail her stability. Unspoken secrets and buried memories surface as Una and Ray sift through the wreckage of their past.

Poppy Corby-Tuech
as Poppy
View All

It's at once talky yet emotionally remote, and while posing a risky set of questions about sexual abuse, power and relationships, the experience is an unsatisfactory and draining slog.

It's a difficult film, and at times an ambiguous one. And appropriately so, because it's Una's film.

Una is a film of seismic shocks built to make an audience squirm. Mission accomplished.

The two actors' timing is marvelous. They salvage the force of the play's splintered dialogue.

[Una] mostly succeeds, thanks to fine acting and a smart reconstruction of its source's setting.

In particular, Mendelsohn is a wonder to behold, moving from guilty to lovestruck to terrified.

In transforming the source material the director has crafted a film that is as moving as it is thrilling. It is an unprecedented approach to the subject matter; an experimental treatment a promising new cinematic voice.

Tense and well-acted, Una is not an easy film to watch, but it features two of the best performances of 2016.

Will Perkins
That Shelf
View All Critic Reviews (110)

There are no featured audience reviews yet. Click the link below to see what others say about Una!