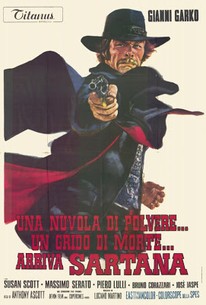 Prolific filmmaker Giuliano Carmineo directed this fourth sequel to Se Incontri Sartana Prega per la Tua Morte (1968) under the pseudonym "Anthony Ascott." Gianni Garko is Sartana, the mythical, almost supernatural avenger whose gun is his justice. This time, Sartana helps a gambler named Grand Full (Piero Lulli), who claims to have been wrongly accused of murder. The avenger breaks Grand Full out of jail and the pair escapes to the site of the crime -- the town of Mansfield -- where they battle bounty hunters and a wicked boss (Massimo Serato) before the gunslinger figures out that he's been had. Needless to say, Sartana does not take kindly to having been fooled. Nieves Navarro (a.k.a. Susan Scott) co-stars in this grim Italian-French spaghetti western with Frank Brana and Bruno Corazzari. One of the genre's best-known composers, Bruno Nicolai, did the soundtrack. ~ Robert Firsching, Rovi

Another badass Sartana movie. This time the James Bond-esque gadgets are everywhere, not to mention Sartana's almost supernatural skills. Another great Nicolai score, the plot gets a bit hard to follow eventually, again, just what you would expect in a Sartana flick. Is less polished than "Have a good funeral", but as the last film in the franchise it sure goes out with a bang.