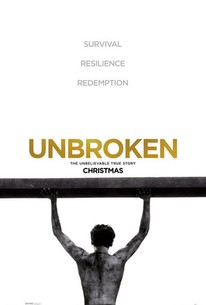 Critics Consensus: Unbroken is undoubtedly well-intentioned, but it hits a few too many of the expected prestige-pic beats to register as strongly as it should.

Critics Consensus: Unbroken is undoubtedly well-intentioned, but it hits a few too many of the expected prestige-pic beats to register as strongly as it should.

Critic Consensus: Unbroken is undoubtedly well-intentioned, but it hits a few too many of the expected prestige-pic beats to register as strongly as it should.

Academy Award (R) winner Angelina Jolie directs and produces Unbroken, an epic drama that follows the incredible life of Olympian and war hero Louis "Louie" Zamperini (Jack O'Connell) who, along with two other crewmen, survived in a raft for 47 days after a near-fatal plane crash in WWII-only to be caught by the Japanese Navy and sent to a prisoner-of-war camp. Director Jolie began shooting some of the most dramatic and challenging scenes on Wednesday, October 16, on location far out at sea in Moreton Bay, Australia, with Zamperini (O'Connell) and his fellow airmen-Phil (Domhnall Gleeson) and Mac (Finn Wittrock)-having impossibly survived being adrift in the open Pacific for several weeks. Working with cameras on a floating rig in choppy waters and braving the elements, with actors dieting for months to appear as depleted as their characters, Jolie completed a successful first day of a location shoot that promises to be rigorous and uniquely challenging. Adapted from Laura Hillenbrand's ("Seabiscuit: An American Legend") enormously popular book, Unbroken brings to the big screen Zamperini's unbelievable and inspiring true story about the resilient power of the human spirit. Starring alongside O'Connell, Gleeson and Wittrock are Garrett Hedlund and John Magaro as fellow POWs who find an unexpected camaraderie during their internment, Alex Russell as Zamperini's brother, Pete, and in his English-language feature debut, Japanese actor Miyavi as the brutal camp guard known only to the men as "The Bird." The film is produced by Jolie, as well as Matthew Baer (City by the Sea), Erwin Stoff (The Day the Earth Stood Still) and Clayton Townsend (This Is 40). Leading the accomplished behind-the-scenes crew is 10-time Oscar (R)-nominated cinematographer Roger Deakins (Skyfall). Academy Award (R) winners Joel and Ethan Coen (No Country for Old Men) rewrote the screenplay from earlier drafts by William Nicholson (Les Misérables) and Richard LaGravenese (HBO's Behind the Candelabra).

Garrick Parkes
as Marine at Airbase

Brett Clancy
as Photographer at Olympics

Now Streaming: A Most Violent Year, Unbroken, and More
2015 Oscar Nominations
Parental Guidance: Into the Woods, Big Eyes, and More

Unbroken doesn't penetrate the surface of emotions, remaining a slightly detached, albeit respectful, representation of a potentially touching and inspiring true story.

... so painfully generic that one could probably copy the review of any derivative WWII film and paste it right here.

Unbroken is an odyssey detailing a harrowing ordeal and insurmountable odds. But this polished story feels conventional, overly long and not sufficiently involving. [Full review in Japanese]

Unbroken falls short of the epic war drama and sweeping testament-to-the-human-spirit it strives to be.

It is a handsome film, bleak and dark and elegantly filmed told with a mixture of intensity and something like restraint, even distance.

Despite some fine performances and well-staged sequences, Zamperini's story becomes strangely dull, thanks to the length and repetitiveness of many sequences. Jolie has talent, no doubt about that, and may one day make a really outstanding film.

Zamperini's story in Unbroken can be an inspiration to think about forgiveness.

This is a harrowing and haunting film that leaves you feeling grateful to be alive.

As well intentioned - and patriotic and high minded and valorous - as Jolie's presentation of the film is, it falls short on this one, very major, aspect of the story.

The entertainment value of nonstop, brutal punishment with little hope of personal retribution or adventuresome escape is limited at best.

An incredible story of survival and human endurance told in bland, flat strokes.

Once the indomitable spirit of the man is revealed, the movie finds a sturdy, stirring tone which carries it well through some very tough going.

There are four storylines here and each one would've made a whole film if done originally. Instead they are crunched together, each story cribbing shorthand from other films, each played very big ... and yet you've seen it all before. And that muffles the intent. For instance, there's a direct steal from Jaws in the work. You immediately recognize the steal and watch for it to play differently, but it doesn't. You feel gypped.

"Unbroken" is a very well made film but it lacks the emotional heft one would expect. Zamperini is presented almost as a hapless, regular Joe to whom bad things randomly happen, and the primary strategy he seems to employ in the prison camps is not drawing attention to himself and not provoking his tormentors (a strategy seemingly at odds with the scenes shown from his childhood as a brash hoodlum and competitor). Very little attention is paid to showing the internal strength that got him through these terrible times. Since that internal strength is really what makes the story interesting, the film comes across as a lukewarm portrait of an everyday hero and is not very inspirational.

Ambitious, tastefully filmed, and brilliantly held together by breakout star Jack O'Connell, "Unbroken" marks Angelina Jolie's third directorial film, and although there are many positives about this film, there are also numerous negatives. Clocking in at a near 140-minute running time, the film both brushes too quickly over some of the most inspirational events, and takes it's time to get through the slower moments, to showcase the acting. These choices work in some cases, due to the great casting choices, but the film ultimately suffers from a true story that is unclear whether or not should have been "movie-fied." Angelina Jolie does a fine job directing and the Camerawork is some of the best of 2014, but it just drags too much to keep you invested for very long. Did I enjoy this film? Absolutely, but it's focus is a bit too clumsy narratively, and Visuals may take you out of the picture as well. Overall, "Unbroken" is a powerful film that misses more than it should.

A former Olympic runner is shot down during World War II and held as a POW by the Japanese. A film that is paradoxically less than the sum of its parts, Angelina Jolie's directorial effort is full of heavy-handed camera-work and short on character development. Essentially a film about men grunting and grimacing while enduring hardship, the relationship between Louie Zamperini and "the Bird," his sadistic prison warder, is woefully undeveloped. The Bird pushes Louie, and Louie endures, and each subsequent push does little to increase the drama or change the characters' dynamic. This relationship is central the film's plot, and there are too few plot events that change their interaction. Jolie shows off her sense of lighting and scenery too much for her own good, making it obvious that this is a film and archly constructed. Overall, even if Jolie had gotten out of her own way, the characters aren't compelling enough to make this a good film.