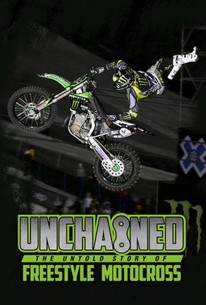 UNCHAINED, which won the Emmy Award for the Best Sports Documentary Film of the year, is the adrenaline-soaked, heart-wrenching story of the birth and boom of the most extreme sport on the planet: Freestyle Motocross (FMX). Directed, produced and written by Paul Taublieb, Emmy-winning filmmaker and one of the co-creators/producers of the X Games, along with Jon Freeman, pioneering filmmaker of Crusty Demons of Dirt, the film follows a group of motocross racers who abandoned conservative racing culture to create a sport and lifestyle all their own. Narrated by Academy Award-nominated Josh Brolin, it features the biggest names in extreme sports, including Travis Pastrana, Brian Deegan, Mike Metzger, Carey Hart and Tony Hawk, all baring their souls in an unprecedented fashion, taking viewers on a cinematic thrill ride.

Critic Reviews for Unchained: The Untold Story of Freestyle Motocross

There are no critic reviews yet for Unchained: The Untold Story of Freestyle Motocross. Keep checking Rotten Tomatoes for updates!

There are no featured reviews for Unchained: The Untold Story of Freestyle Motocross at this time.